Is it against the law to leave a dog unattended in a hot car?

Are you sure about that?

Although animal cruelty, neglect, endangerment, and abuse in a variety of forms are illegal in all 50 states, in varying degrees that can earn the offender a simple citation all the way up to a felony charge, only 16 of those states have laws on the books specifically prohibit leaving an animal locked inside a hot car.

In the 16 states named above, although it is illegal to leave a dog unattended, it is also unlawful for a concerned citizen to take matters into their own hands.

Of the 16 states that make it illegal to leave a dog in a parked car, only 14 grant permission to either law enforcement, animal control, or other authorized personnel to enter a vehicle.

In New Jersey and West Virginia, although it is illegal to leave a dog trapped in a hot car, no one, not even law enforcement officers, are granted the authority to break into the vehicle to save the dog from dying.

What about those other 34 states?

Although the remaining 34 states may not have laws that specifically make it illegal to leave a dog (or other animal) unattended in a vehicle, all 50 states have laws in place to protect animals from abuse, neglect, and cruelty.

It can be argued that a dog left unattended in a parked car, without protection from extreme heat (or cold), that is suffering or showing signs of distress, is the victim of cruelty.

Video: The State Where It May Become Legal to Break Into a Car

In other words, even though a dog owner may reside in one of the 34 states without specific laws to protect dogs in hot cars, they can be (and very often are) charged with animal cruelty for doing so.

Additionally, although state laws may not specifically address dogs trapped in hot cars, many county and municipal laws do address the issue. Check with your own city and county to be sure of the exact laws in your area.

So what is a concerned animal lover that spots a dog suffering inside a hot car supposed to do? 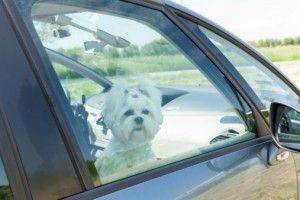 Currently, there are zero states that grant legal permission to concerned citizens to break and enter a vehicle to save a distressed animal.

If you see a dog in a parked car, no matter which state or what that state’s laws provide for:

1. Make every reasonable effort possible to locate the dog’s owner.

2. Call local police and animal control and report the incident.

3. Remain with the dog until help arrives.

4. If the dog is in imminent danger and help has not yet arrived, you’ll have to use your own judgement, considering the possible legal ramifications of breaking and entering to save the dog.

Many of us would happily face criminal charges, fines, and possible jail time if it meant saving the life of a dog.