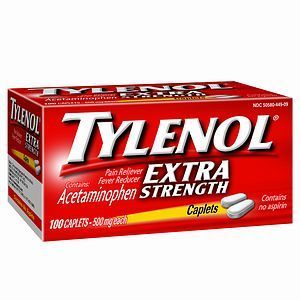 Tylenol is a well known Acetaminophen brand so we’ll cover it here. Misuse of OTC meds for treating dogs is widespread, but these pills may take the crown. Knowing the dangers is particularly important due to its popularity.

Pet parents give deadly human-formulated medicines, including Tylenol, to their dogs everyday and the effects are often tragic. If we can prevent even just one death, then our job is ‘mission completed’.

The internet is cluttered with conflicting opinions and information. This wouldn’t be so bad if we weren’t talking life and death. Let’s set the record straight about the negative effects of giving a dog Tylenol.

Can I Give My Dog Tylenol? Answer: No!

It helps with many common conditions, especially pain, but it’s not safe for Fido.

Dogs sure do experience pain, allergies and fevers just like people. They also catch colds, the flu and even cough but that doesn’t mean Tylenol is their solution. We cannot stress enough, Tylenol can be a very deadly drug for canines.

We recommend getting a quality pain product made for dogs. It’s much much safer and equally effective.

There are so many branded pain killers that people routinely take. Their common everyday usage has become a real risk to dogs. Be well informed about which pain medications are dangerous for dogs. This way you’ll keep certain pills out of reach.

Dog owners should familiarize themselves with the term acetaminophen. This is the main active ingredient in Tylenol as well as many other brands on the market.

Acetaminophen, which is actually not an NSAID, is poison to dogs. Typical symptoms of pain killer poisoning include difficulty breathing, vomiting (can be a good thing), change in coloration of the gums, jaundice (a sign of liver damage) and a change in body temperature among others.

One Tylenol tablet can contain over 300 milligrams of acetaminophen which can harm a human liver, as the FDA recently has warned, never-mind the liver of a dog. Such liver damage is irreversible unlike many of the symptoms listed above.

Just because it can be easily purchased doesn’t make it benign or lacking in strength. The toxicity of these drugs cannot be overstated when introduced into a dogs’ system. Motrin, Excedrin, Panadol and Midol are all very harmful for dogs no matter what their weight, large or small.

If you gave your dog Tylenol or they accidentally ingested some you need to act. Depending on the dose, a visit to a vet is a must. Closely monitor your dog for symptoms if they took Tylenol.

Be prepared for blood work or a urinalysis at the vet. Intravenous treatment and vitamin C is often used to recover from acetaminophen poisoning.

While you’re at the vet’s office, ask about getting a safer prescription to treat whatever’s ailing your dog. They’re knowledgeable about the latest and greatest drugs which can safely treat all kinds of conditions.

Not long ago there were few good and safe options for dog owners wanting to self treat their four-legged friends. Dogs would just deal with pain, which is actually better than being harmed by poisonous Tylenol.

Today we have improved non-steroidal anti inflammatory drugs AKA NSAIDs. These drugs have improved the qualify of life and longevity of dogs when used appropriately.

This isn’t to say NSAIDs don’t come with side effects and other complications. Aspirin can be harmful to dogs unless it’s carefully administered. Ask a vet about better drugs as many of the well known brands are potentially harmful.

Never give your dog Tylenol. Besides, it’s not actually an anti-inflammatory agent. Rimadyl, in terms of suitability for dogs, is much safer. There’s also an excellent pet pain product that’s canine-formulated. Lots of alternatives can be purchased without a prescription. Whatever you do, use a more appropriate option instead of dangerous Tylenol.