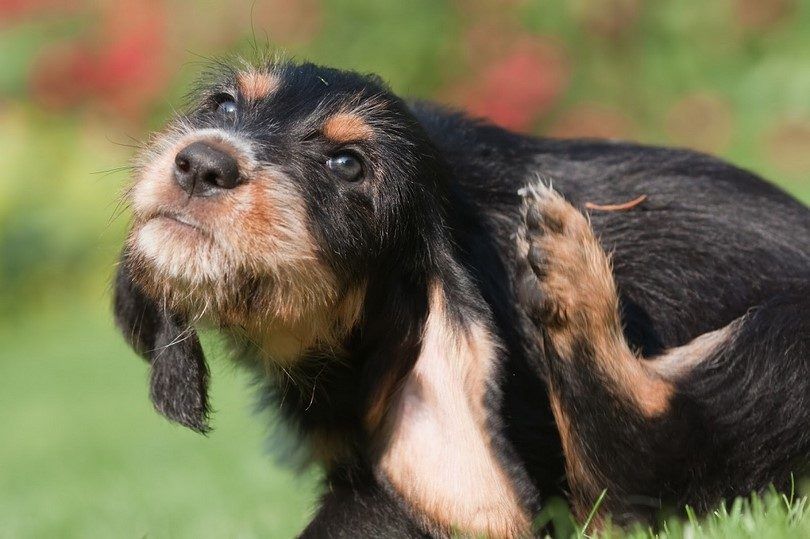 Just like humans, dogs can also develop different allergic symptoms when their immune system is sensitive to certain substances called allergens. They represent a danger for a pup’s body, causing severe problems when they are inhaled, ingested or when they come in contact with a pup’s skin. An atopic allergy can be triggered by aeroallergens, such as the pollen from different Poaceae (Gramineae) plants, shrubs and trees. Dog grass allergy is part of this category as well.In order to understand how this works, knowing what exactly atopic allergies are and how they can affect a pooch’s skin is mandatory.This is not the only type of allergy that a dog can have, but it is the only type that explains how a puppy can be allergic to grass. Taking your pup out for a walk or a run is theoretically really good for its physical and mental health. However, it seems that such an innocent activity can harm around 10% from all the dogs out there. Of course, there are certain breeds that might be in danger to develop such allergy and some that are protected from it. This depends on some genetic factors that intervene in situations like these and that will be further explained as it follows.Atopic allergies and atopic dermatitisGrass allergy in dogs occurs, among other reasons, because their skin is vulnerable and it cannot act as a barrier. Usually, a pup’s skin should be involved in the mechanical protection of the body and have an important role in protecting it. It should be a complex immune organ involved, through its structure and components, in the elaboration of the immune response against different environmental aggression. 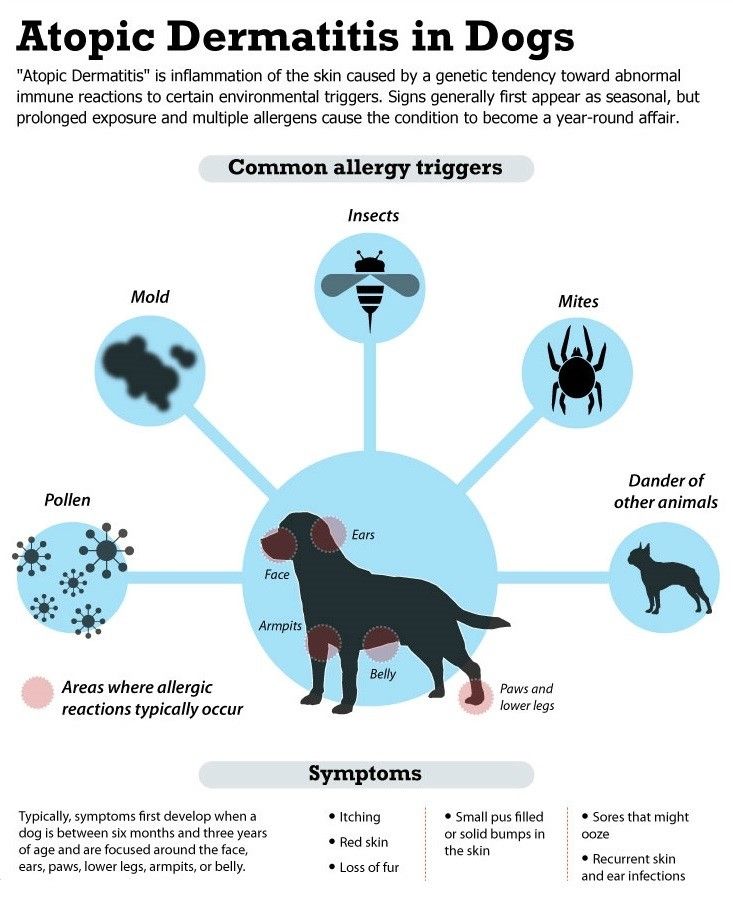 The hypersensitivity reaction represents an exaggerated immune response determined by exposure to an allergen. In this case, when a pooch’s skin is in direct contact with grass, it develops a sensitive reaction to it that manifests in different ways.An atopy is something defined as a congenital predisposition that favors the occurrence of allergic reactions to both dogs and humans. In this case, grass is an allergen that enters a dog’s body transcutaneous or, simply put, through its skin. Atopy includes affections such as asthma, allergic rhinitis and atopic dermatitis, which is exactly what a pup is suffering from in case it is allergic to grass. The latter is a common skin condition in dogs. Around 10% of the canine population develops it at a certain point in life.It is characterized trough varied clinical manifestations because it can be combined with microbial infections or fungal infections. Although a pup is predisposed to having an atopic allergy, it can be protected if it is not exposed to it. In this case, a dog cannot develop a grass allergy if it is not exposed to grass. Breeds such as pug, French bulldog, Cocker, Dalmatian and terrier have a congenital predisposition to develop atopic dermatitis or, more specific, grass allergies.Symptoms of atopic dermatitis in dogsAs said, the skin barrier is no longer efficient in case of atopic dogs, fact which allows the adherence of bacterial or fungal pathogens to certain cells from the skin’s layer. This is why, the affections produced by these pathogens can cause or complicate the clinical manifestations of atopic dermatitis and make it harder to diagnose.The atopic dermatitis can occur in dogs aged between 1 and 3 years. This happens in 75% of the cases. There were rare cases when the pooches were younger than 6 months or older than 7 years. It is said to be a disease that affects young pups. 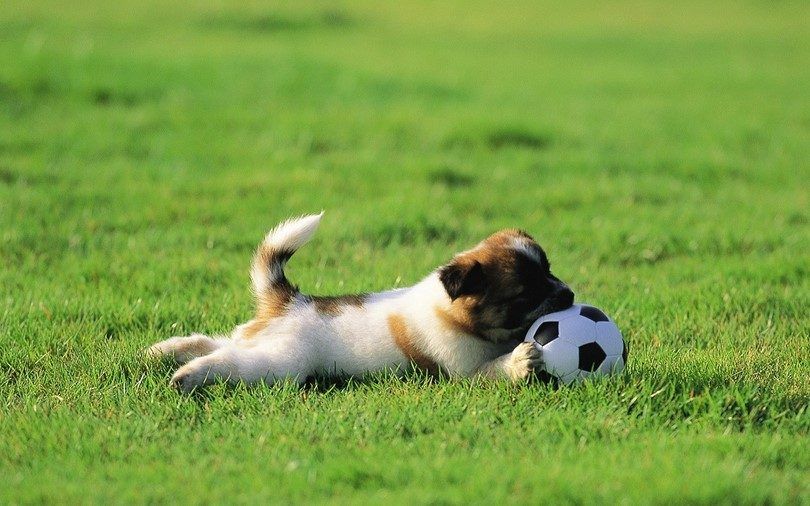 This disease begins with the appearance of pruritus that has a moderate to high intensity. The itching sensation can be located on a dog’s face, including lips, cheeks, eyelids and ears, on its armpits, groin, anus, abdomen, limbs and interdigital spaces. The pruritic manifestations are further materialized when the dog rubs its face on the carpet or on other objects, when it starts to lick itself intensively on certain areas of its body and when it bites itself, causing itself to bleed.The first skin lesions in case of grass allergies look like reddened areas and they rapidly develop in macules, papules, pustules, purulent inflammations of the follicles and furunculosis. All you need to know about these forms of lesions is that the ones that appear in early stages are easier to treat, while the other ones get infected with staphylococcus and are much harder to treat and painful for your doggy.The evolution of this disease is acute, but it tends to become chronic if it reoccurs. It is an allergic skin condition that can manifest through the hyperpigmentation or the lichenification (thick skin) of the affected areas in advanced stages. Also, there are atypical evolutions of this disease that are difficult to diagnose such as external otitis, rhinitis, and allergic conjunctivitis and so on.Treating atopic allergies in dogsThe best long-term solution to prevent and treat allergies of this type is to change the environment in which the doggy lives. Thus, it would be ideal not to come in contact with grass or, at least, to the certain grass types that harm it. There are specific blood tests that can be made in order to identify the exact type of grass or plant that harms your pooch.However, these are expensive and require a wide range of research areas. You can at least look up what plants grow in the area where you took your doggy and it got the allergy. In case they are identified, the vet will propose immunotherapy.You could learn to do subcutaneous injections and thus take your dog to the vet less often and still cure it. With the help of this type of treatment, around 75% of allergic dogs have a positive response. They might require less medical care or none. However, this process takes up to one year. 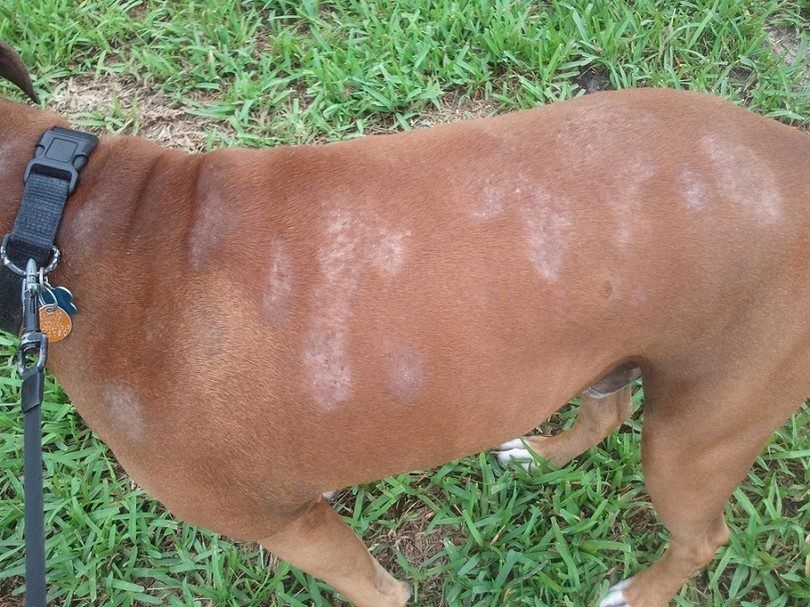 Antihistamine medicine helps control itching and scratching in most cases, but the drugs based on corticosteroids are also very effective. However, they both have serious side effects. Pheniramine is the most used antihistamine drug and it is often combined with chemotherapy (blood therapy), the local administration of ointments, anti-infective solutions and corticosteroids.Fabulous results were obtained when cetirizine was used. It is an antihistamine that reduces itching and it has no known side effects. Moreover, it is effective in case the affection reoccurs. Capsules with omega-3 fatty acids are also recommended for treating grass allergies.On the sad side, the adverse effects of corticosteroids can lead to the development of the Cushing syndrome. On medium to long term, a dog treated with corticosteroids can get the Cushing syndrome of variable severity. Therefore, the treatment with corticosteroids should be discontinued. Such medicine should only be used during short periods of time or when there are no other alternatives. Topical corticosteroids may be an alternative in mild cases or chronic cases, but only if they follow a systemic treatment that controlled the main clinical symptoms.As you can see, if your dog develops such an allergy, you will have to accept treatment, even if this treatment has side effects or if it is only effective for a short period of time. When your pup suffers, you could take the wrong decisions and pick a treatment that only reduces inflammation and its itchiness level.However, that will not help it in the long run. As said, the immune therapy is the safest one. It does take a long time until it shows effects and it might be totally ineffective in some cases, but it is definitely worth a shot. 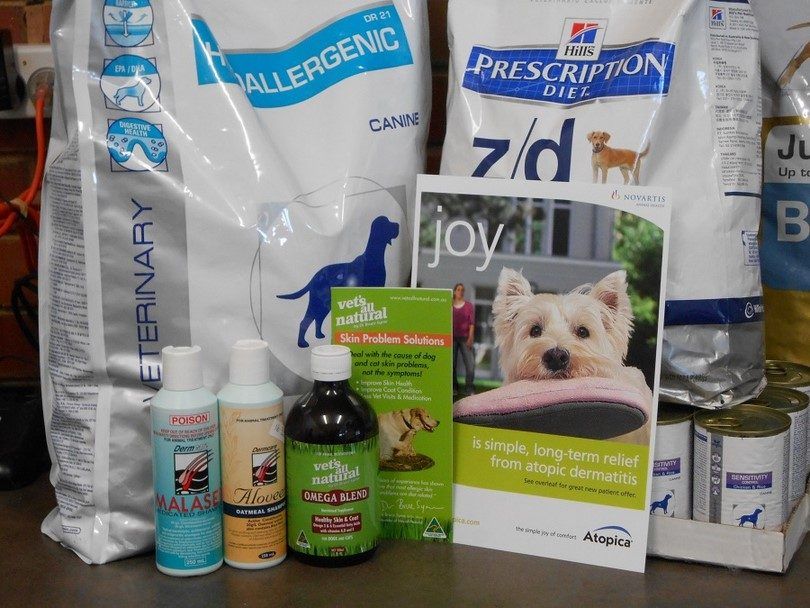 There is only 1 chance out of 10 for you to have an atopic dog with an allergy to grass. However, do not feel unlucky if your best canine friend is that one. Continue to love and care for your dog and do whatever it takes to make it feel better.If you are really attached to your pup, then you might feel its wounds like they are your own, so hurry to the vet or at least make an appointment and do some research meanwhile. Treating your doggy by yourself is something you should not do even if you are extremely informed and certain that your diagnosis is correct.The cause of allergies is really hard to determine in case of people, not to mention in case of dogs. We can easily talk to a doctor and tell him/her which are our exact symptoms, but a dog cannot do that. So, it needs special care, as well as special attention.Keep it under supervision and do not let it harm itself when the itchiness becomes too unbearable for it not to scratch it. Put a collar around its neck that stops it from biting itself when scratching is no longer enough to reduce its feeling of pruritus induced by the said allergy to grass.