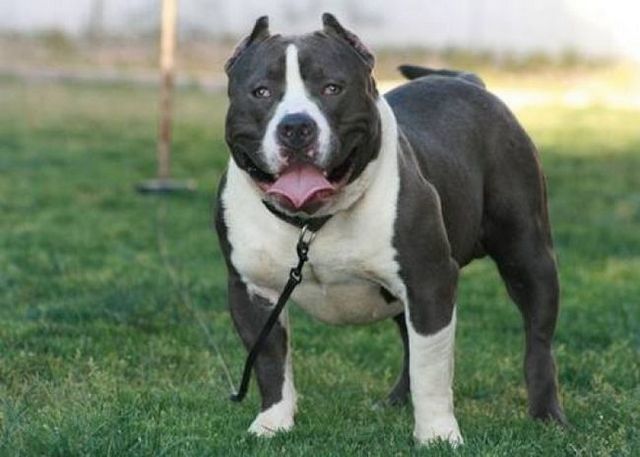 The Mini Pitbull, also commonly known as the Pocket Pitbull, gained it’s name because of it’s size. Mini Pits are a mixed breed that resulted from crossing American Pit Bull Terriers and Patterdale Terriers. They were bred for the purpose of being companion dogs.

Also referred to as the American Bully, they are a recently developed breed that first surfaced in the 1990s. They stand very low to the ground usually measuring, at the most, around 16-17 inches in height.

Although the Mini Pit was unheard of until around 20 years ago, the breeds from which they originated have been known in the US for about the last 200 years. Their history is steeped in fighting and blood sports. In England, when the blood sports were at their height, there were two games that were very popular.

One consisted of an Old English Bulldog pitted against a chained bull. The other involved Terrier type dog that was put in a pit to fight off rats. After the bull fighting was banned, dog fights became highly popular. The Old English Bulldog and the Rat Killing Terrier were crossbred and the new breed became a popular pick for the fights.

This mixed breed was referred to as Bull and Terrier. Eventually after much breeding, these dogs bred true and became two seperate pure breeds. These were called the Staffordshire Bull Terrier and the Bull Terrier.

In the early 100’s the Staffordshire Bull Terriers were introduced into the United states and became a very popular breed. They were also used in fights in the US and quickly became known as American Pit Bull Terriers.

This breed was not only used in fighting but were also trained to hunt, and a catch dogs and vermin eradicators. Then at the end of a work day they would come home to serve as family pets and companions. As a result the breed developed a unique range of temperament.

The Mini Pit breed came about through a desire to breed a dog solely for the purposes of companionship and shows. Although it is claimed by breeders that the only two breeds used in the development of Mini Pits was the American Pit Bull Terrier and the American Staffordshire Terrier, it is widely believed that many breeders also used other breeds.

Evidences of such breeds as The English Bull Dog and the Staffordshire Bull Terrier can be seen in the physical makeup of Mini Pits. It is also thought that American Bulldogs, Bull Terriers, Rottweilers, Bullmastiffs and mixed breed dogs were used.

Because of the use of so many different breeds, the appearance of the Mini Pit became rather varied. Generally the name Mini Pit is thought to refer to the dogs that are smaller than the true American Pit Bull Terrier, but the American Bully can also be significantly larger.

Their build is generally very stocky, muscular and thick, but they do vary in build. Also their coats come in a variety of patterns and colors. 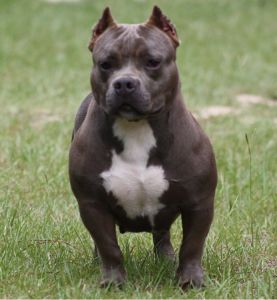 Since this breeds chosen to develop the Mini Pit were very people oriented breeds, the Mini Pit serves very well as a companion dog. They are generally known to be very affectionate and loving. However, temperament and disposition will vary depending on if and how many other breeds were crossed into their ancestry.

Generally, the Mini Pit bull does very well around strangers. Although some individual Mini Pits can tend towards aggression, as a whole the breed can be trained to be very polite and sociable.

It is highly important that owners of a Mini Pit invest in proper training. Although the breed is not generally aggressive, they are physically strong and determined enough that even the slightest tendency towards aggression can prove to be a very big problem if not dealt with properly and immediately.

Mini Pits make decent watch dogs and have been successfully trained for personal protection. However, the fact that they are not especially prone to high amounts of aggression means that they don’t make great guard dogs.

Although training can greatly diminish any potential aggression problems, it won’t always eliminate them entirely. It is possible that sometimes Mini Pits will remain at least somewhat aggressive towards specific parties, such other dogs of the same gender, those who may breach their territory uninvited or animals that might be viewed as prey.

In conclusion, Mini Pits can make great companion dogs but do require proper and consistent training to ensure the safety and well being of all involved.

Mini Pitbulls, like any other breed of dog, need to be trained. Get started on the training of your Mini Pit today with Doggy Dan’s fast and effective course.