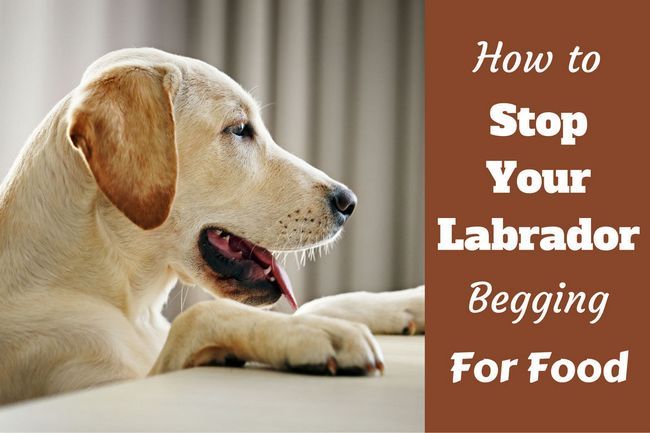 Picture the scene: You’re sitting at the dinner table and your beloved Labrador is doing their best sitting right next to your chair, looking up at you with sad brown eyes and perhaps even drooling or whining.

For many dog owners, this pretty much describes every mealtime ever. And, thanks to their unending appetite and unwavering love of food, it’s even more relevant when you’re a pet parent to a Labrador.

Many dog-lovers simply accept this as part and parcel of having a canine companion. However, it can still get frustrating. Plus, if you entertain guests who aren’t used to dogs, it can be embarrassing for you and annoying for them.

The good news is, it’s entirely possible to train your Labrador to stop begging for food. The bad news is, it can take some time to perfect, especially if you have an older dog who’s been getting away with begging for food for years. It also requires a healthy dose of patience and repetition.

If you’re willing to put in the work, read on and we’ll tell you how to stop your labrador begging for food!

Why Does Your Labrador Beg For Food, Anyway?

On the most basic level, your dog begs for food because they can smell it, they know it will taste good and they want to eat it. Labradors especially are known for their voracious appetites. So, you have to expect they’ll pester you for food if you never teach them not to.

From an evolutionary perspective, dogs were pretty much designed to beg for food. Back before dogs had evolved from wolves, the members of the pack that were lower in the hierarchy would have to wait until the Alpha members were done with their meal and take what was left.

Slightly later, modern dogs evolved in the main part due to their relationship with humans. These early dogs would help humans to hunt. In return, their human companions would share food with them.

Video: How to Get Your Dog to STOP STEALING Everything Right Now!

So, it’s natural for dogs to look to humans as a source of food. Especially when you consider that even today we provide food for our dogs. How are they to know which food is for us and which is for them if they’ve never been taught?

Unfortunately, you may have accidentally trained your pup’s begging behaviors into them. If you’ve ever fed your dog while they were begging, told them off, smiled at them, stroked them, or otherwise given them attention, then you’re part of the problem.

But, don’t worry. Start now and soon you’ll have a dog with perfect manners at the dinner table.

To learn, dogs need to know their behavior is okay all the time or never okay. If you don’t mind your dog begging at the table, that’s fine. Let them! If you do mind (which we assume you do since you’re reading this article), never give in to their begging. Not “just this once.” Not when you’re eating their favorite food. Not because it’s Christmas. Never.

If you give in to those adorable “puppy dog eyes” just one time in ten, they’re still going to beg for food every single time.

However, for anyone who likes sharing their food with their four-legged friend, don’t be disheartened. This doesn’t mean you can never give your dog “people food” or even share some of your food from the table. It just means you have to be very clear about when you feed your Lab.

Do it right so you’re rewarding good behaviors rather than reinforcing negative ones.

Get The Whole Family On Board

This is another vital part of successfully training your Labrador not to beg for food. Tell the rules to everybody who lives in the house and anyone who visits regularly.

Set clear boundaries about when it’s okay and when it’s not okay to give your dog food. If even one family member is flouting the rules, your pup isn’t going to learn.

Remove Your Dog From The Situation

As long as you don’t mind separating your dog from you during meal times, there is a quick fix to this problem: Just remove your dog from the dining area.

Put your dog in the kitchen behind a baby gate, crate them (if they’re crate-trained), or shut them in another part of the house while you eat. Leave them with a stuffed Kong or a treat puzzle and this will help keep them occupied.

If the food isn’t right in front of your dog, they’re not going to be thinking about it, and they should be quite content on their own while you’re eating.

The main problem with this, however, is that it has its limitations.

You’re not tackling the root of the problem, so if you’re ever in a situation where you can’t separate your pup from the dinner table, they’re going to go straight back to begging.

It also doesn’t help at non-meal times. For instance, if you’re having a quick snack in front of the TV or while you’re preparing food in the kitchen.

This can be a good interim solution if you’re going to be having guests over for a few days or you’re planning a special meal you don’t want the dog to drool all over.

However, if you’re truly serious about curbing your Labrador’s begging problem, we’d suggest reading on and learning how to train away the behavior for good.

So you’re ready to start training your Labrador not to beg for food? As we’ve already stressed, it will take patience and consistency, but you’ll get there eventually.

1. Decide Where You Want Your Dog To Be While You Eat

Decide where you want your dog to be while you eat. We’d recommend placing a doggie bed somewhere not too close to the table but close enough you can through your pup a treat with fairly good accuracy. When they’ve got the hang of not begging, you can move it further away if you prefer.

Tell your dog to lie on the bed at the start of your mealtime. If you’ve taught them a “down-stay” you can give this command.

At first, we’re not expecting them to stay there for long. Don’t worry if your dog gets up, just move on to the next step.

This is the hard part for some people, but it gets results. You need to completely ignore any unwanted behavior.

Begging behaviors vary from dog to dog and include anything from silently sitting and staring to drooling to barking or whining.

When we tell you to ignore these behaviors, we mean completely ignore them, don’t just not reward them.

So, in addition to not rewarding your pup by giving them what they want (food), also refrain from telling them to lie back down, scolding them, saying “no,” petting them, reassuring them or even looking at them.

Any acknowledgment for you — even a negative one — can reinforce the behavior and tell them that they’re on the right track.

We know it can be hard to ignore your dog. Especially when they’re barking or whining and it’s getting to you. But, stay strong and they will eventually give up.

What you’re doing here is waiting it out. If you ignore your dog’s begging for long enough, they’ll eventually figure out it’s not working and go and do something else.

Ultimately, you want your dog to go lie down on their bed, which was what you originally asked them to do. However, lying down anywhere on the floor, going to play with a toy, sitting down quietly away from the table, or doing anything positive that’s not begging for food is good enough.

As soon as they stop begging, reward your dog with a treat. This could be a morsel of your dinner if you want to share, or it could be a doggie treat.

Throw the treat over to wherever your dog is. Don’t call your dog over to the table to give them the treat, as this would be confusing.

What you’ve just done is rewarded your dog for not begging. Continue doing this and they’ll learn that begging = no food, whereas NOT begging = food.

Your dog won’t understand this after happening just once. In fact, don’t be surprised if they immediately resume begging after the first few times you reward them for not begging.

Repetition is key here. At first, every single time your dog lies on their bed, lies on the floor or otherwise stops their begging, give them a treat right away. If they stay lying down after receiving the treat, throw them another.

As your dog gets better at this, you can spread out the intervals between giving treats. Eventually, you might only need to give your dog one or two treats to keep them lying down the whole meal. Of course, you can still choose to throw your dog a treat every couple of minutes if you prefer.

Don’t expect this to happen overnight. However, you should notice improvement after just a few meals. You’ll notice your dog starting to give up and lie down faster and not get up as soon as you’ve given them a treat.

We know we’ve said it a lot already, but we can stress it enough: be consistent! If you give in to your dog’s begging even occasionally, you’re undoing all work you’ve already done.

How To Stop Your Lab Begging For Food At Other Times

Most people focus on stopping their dog begging at meal times, as this is most prevalent, but there are other times when your pup might beg for food.

Many dogs will beg when their owners are preparing food in the kitchen. Most Labs will also beg for any snacks that might come out.

Just because you’ve taught your Labrador not to beg for food from the table, this won’t translate to begging in other places.

Some dogs will assume all begging is off-limits whereas others will need to be taught not to beg in each place individually.

Luckily, the method is more or less the same. So, if you’ve already taught your dog to stop begging at the table you’ll know what to do.

Ignore your dog while begging, reward them when they stop, and keep repeating until they’ve got it down.

When teaching your dog not to beg in the kitchen, you’ll have to decide whether you’re happy for you dog to lie somewhere in the kitchen or you’d rather they stay a respectful distance outside and you throw them their treats there.

This will probably depend on the size of your kitchen and whether your dog has a tendency to lie right in your way!

Now that you know how to stop your Labrador begging for food you’ll have realized it’s not that hard in theory.

The difficult part is making sure you stick to it 100 percent and never give in to those mournful looks your canine companion keeps giving you.

It does take some patience to get it right. Plus, if your dog is set in their ways, it can take longer than average. But, once your faithful friend has mastered it, the peace you get at mealtimes is so worthwhile!