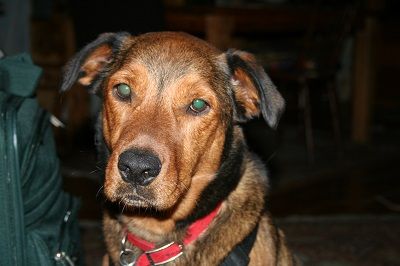 Dog upset stomach: just as humans, dogs may get every now and then a stomach ache. In most cases, nothing really to worry about, by following some simple guidelines your dog may be back to normal within a few hours. However, there are some cases where the symptoms your dog is exhibiting is much more than a normal stomach ache and may need immediate veterinary attention. Before looking at stomach ache solutions let’s take a look at some symptomalogies that suggest a more serious issue:

It appears that statistically, bloat affects the most large, deep chested dogs. This condition is also commonly known as torsion or technically as gastric dilation volvolus (GDV). Very often the culprits of such a serious disorder may be the what we may consider minor occurrences such as: gulping down a large amount of water right after eating, exercising on a full stomach, over eating, eating too fast swallowing a large amount of air, or stress.
A dog affected by bloat will often try to continuously attempt vomiting with no result, will appear restless and pace, will be in a hunched up position, will lack normal stomach noises, will have pale gums and often a bloated hard abdomen will appear lethargic or not act right.
This condition is an emergency where hours or minutes can make the difference between life and death. Some over the counter products such as Mylanta gas or Gas-x may give some relief while heading to the closest emergency center.

If your dog or puppy likes to eat and swallow odd items, he/she may be prone to an intestinal blockage. Dogs with this condition will start to strain and will not produce a bowel movement, suspect a potential blockage also if the dog starts vomiting as well and is unable to keep food down. Do not be tricked though if you dog develops some diarrhea, as sometimes some feces make it though around the obstruction in this liquid form. If your dog loves ingesting rocks, buttons, coins or just anything and the above symptoms seem all too familiar then a prompt vet visit is required. X-rays will confirm the obstruction and emergency surgery may be needed.

If your dog is a puppy or an unvaccinated adult, Parvo can be a potentially dangerous disease. Dogs with Parvo will stop eating, will vomit and have diarrhea in large amounts, will become lethargic and develop a fever and often blood will appear in their feces which will also have an intolerable odor. If you suspect Parvo have your dog seen ASAP as supportive care is essential to prevent dehydration.

This condition can be life threatening as well as if often caused by consuming fatty meals. Dogs that eat greasy “people food” may develop this condition but so are dogs affected by some systemic disorders such as high amounts of lipids or high amounts of calcium in the blood. Dogs with pancreatitis will vomit, have diarrhea producing a yellow greasy stool, assume a hunched up posture, and also will have a distended and very painful abdomen. Treatment is aggressive and consists of withdrawing food and water for 24 hours, giving under the skin fluids and providing medications.

A dog with gastro-enteritis is suffering from an inflammation of the stomach and the intestines and therefore will be vomiting and having diarrhea.

Other symptoms are as follows- inappetence, lethargy, listlessness, dehydration, presence of blood in stool and shock.
Dogs will need to be treated aggressively by fasting, preventing dehydration by giving sub Q fluids, giving anti-nausea meds and in many cases antibiotics.

Many parasites are known to cause stomach and intestinal disorders. Routine stool checks should be performed to rule out common parasites such as roundworms, coccidia, hookworms, tapeworms etc. Almost all puppies are affected by roundworms so it is vital to have the vet run stool checks and give de-wormers during the puppies first shot appointments.

These are some of the most common yet dangerous conditions that may affect a dog’s gastro-intestinal system. There are many other causes such as poisons, toxins, protozoans such as giardia, food intolerance etc.
So now that you have ruled out the most serious conditions and have come to the conclusion that your dog may have a simple stomach ache, here are some home remedies:

The general protocol for dogs vomiting or with diarrhea is to fast these dogs for a minimum of 12 to 24 hours. Puppies should not be fasted for more than 12 hours, usually the whole night will suffix. Owners of toy breed puppies and dogs should be careful in fasting as these dogs may get hypoglycemic easily, consult with your veterinarian.

The fast will consist of no food or treats. Water may further upset a vomiting dog, so ice chips may be a good alternative until the dog feels better.

Add a dollop of plain yogurt or cottage cheese to allow some good bacteria to help out the inflamed intestines.

You need to make sure your dog is not becoming dehydrated. Lift gently the skin on the back or between shoulder blades in a tent. If it snap back into position good. If it delays or worse, stays lifted then the dog may need subcutaneous fluids from the vet.

If the dog is having frequent liquid squirts of diarrhea the odds of becoming dehydrated are great. You may help by giving some unflavored Pedialyte or mix in some Gatorade into his water bowl. If the dog is vomiting persistently offering water may further cause vomiting making the situation worse. You can try to freeze some Gatorade and offer it to lick. However, in severe cases the only way to keep dog hydrated is through fluids provided by the vet.

At this point all you can do is monitor your pet. Do not hesitate to have your dog seen if he becomes lethargic, laying around and not acting its normal self. Ensure that following the bland diet your dog has no more vomiting or episodes and that the stools are better formed. At this point gradually add the regular diet and taper off the rice meal. If the vomiting or diarrhea still is present then the dog needs medical attention. The underlying cause needs addressed. The dog may have a parasite infestation, or if vomiting consistently the dog may have swallowed a foreign object that is causing a blockage or the vomiting and diarrhea may be caused by a virus such as parvo.

The natural home remedy of a bland diet may be therefore helpful in many cases, however there are those cases that need immediate vet attention. Usually, your dog’s behavior will give you hints on what to do. Chances, are if your dog is not acting right the vet may need seen the same day.

Disclaimer: The above article is not intended as a substitute for the advice of a veterinarian nor is the source to be used as a diagnostic tool as there may be various conditions that may resemble the descriptions provided.