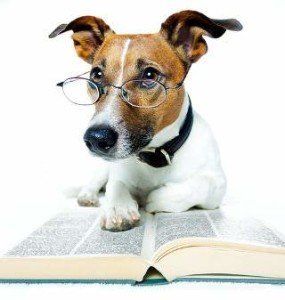 We’ve all heard of taking an IQ test. It’s for testing intelligence but we usually associate it only with evaluation of the human mind. What’s even cooler, and much more fun, is giving your dog an IQ test.

People usually consider their own pets to be very clever. What if you could truly evaluate how smart they actually are? IQ tests for dogs are easy to administer at home, won’t cost you anything and will help you better understand your four-legged friend.

We’ll provide some background and introduce basic tests you can try out on your dog. While the results aren’t scientific, they do reveal a degree of canine intelligence. Remember though, smarts can’t top unconditional love which is why dogs have always been considered man’s best friend.

Can I Give My Dog an IQ Test? Answer: Yes!

But your dog’s breed plays a big role in their inherit intelligence level.

That doesn’t mean there aren’t exceptions. Your dog may be clever, regardless. Science is discovering that the average pooch is much smarter than originally thought. What’s great is that dog intelligence can be evaluated through behavioral reactions, or simple problem solving, to common scenarios.

You can arrange such situations which will test your dog’s intelligence. There are also some great interactive toys which can possibly help them to improve.

Intelligence falls into two categories. One being instinctive, which is largely determined by their genetic makeup and their breed. This is their natural ability. The other kind of canine smarts is obtained from experience and training. In other words, learned intelligence is acquired. This somewhat explains why some dogs can be taught new tricks more easily than others.

Obviously there’s some overlap between these two types of mental abilities. Combine this with other factors such as your dog’s willingness to participate, level of enthusiasm, their health and you can see why results may not be completely accurate. But generally, if your pup is easy to train then they’re likely pretty smart. Actually, IQ testing sort of goes hand-in-hand with training dogs. In any case, the below examples are just some fun and interesting mental exercises you can try with your dog.

One of our favorites is a memory test using 3 cups. Cover up a tasty treat under one of the cups. Then, distract them with something else for awhile. Can they correctly locate their treat on the first try? Another is very silly but pretty revealing. With your dog watching, pretend to grab a snack somewhere in arm’s reach. While you are chewing your imaginary food, do they seem to realize you are just fooling around or do they salivate?

Testing your dog’s ability to recognize danger is another important aspect of canine intelligence. Do they know to look both ways before crossing the street? If you’ve observed that, in our book, that type of awareness will score them some serious points.

Now that you have an idea of what constitutes doggie smarts, you can literally think up hundreds of situations which require some reasoning on your dog’s part.

In order to accurately assess your dog’s IQ level, keep track of exactly how well they’re doing by recording their scores. Many unofficial tests can be found online that include systems for keeping score. Answer the great questions here for a decent assessment for your dog’s overall intelligence.

Dogs are generally very smart animals. Our neighbor’s dog literally brings his leash to his master when he knows it’s time for a walk. We found the inexpensive book called How Smart is Your Dog? to be very useful. Get a better idea of your pet dog’s intelligence by checking certain reaction skills but make any IQ tests enjoyable for your pooch. If they aren’t scoring well, don’t hold it against them. Remember, their breed plays a big role. If your dog isn’t exactly Einstein, they can still be brilliant in your eyes.