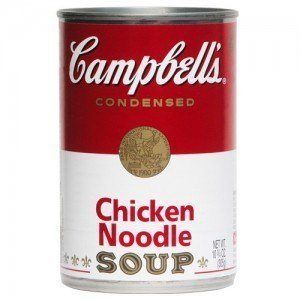 Chicken noodle soup is considered a classic comfort food. It’s tasty, quick and cheap which is ideal for those who don’t cook. People often use it to treat the seasonal flu so it’s especially useful during the cold season. Chicken noodle soup is so well known that some owners are curious to know if they can also give it to their dogs.

It’s relatively safe for dogs, but what you need to watch for is the salt content. Canned soups tend to be very high in sodium, which is a no-no for your dog. The salt in most Campbell’s soups can contribute to sodium ion poisoning. Some soups are also made with small amounts of onion and garlic, which are dangerous for dogs. However, most of the other ingredients of a good quality chicken noodle soup are safe if consumed once in awhile.

If you want your canine to get a taste of chicken noodle soup, take notice of the ingredients. Avoid low quality canned soups, which are very high in sodium and MSG. Instead, why not prepare your own homemade chicken soup for you and your dog?

Can I Give My Dog Chicken Noodle Soup? Answer: Yes, occasionally

It may be enjoyed by your dog but it should be only occasionally and in moderation.

There are ingredients in this comfort food that can potentially harm your dog and contribute to an unhealthy lifestyle. Since there are so many different ways of preparing chicken noodle soup it’s difficult to make broad generalizations. However, Campbell’s soup is not really healthy for anyone.

Homemade soups prepared from scratch are recommended. If your dog is not feeling well, due to flu or an upset stomach, making soup at home is much preferred. The basic ingredients are almost always the same: chicken broth, carrots, noodles, and so on. Stick to the basics and avoid chemicals and excess salt.

Lots of salt can cause excessive thirst and urination which can lead to poisoning. Symptoms include diarrhea, tremors, depression and seizures. A poor diet over the long term is even more serious for dogs and humans alike.

Onion and garlic can bring on anemia in dogs because those foods can destroy their red blood cells. Symptoms associated with this condition include vomiting, weakness, and dullness. That’s why reading labels is so important.

We tend to give our dogs little treats once in a while by sharing some of our food. While some foods are safe such as lean meats, many fresh fruits and vegetables, others can do serious harm. Giving your dog ice cream, pizza and other foods containing questionable substances are no-no’s for dogs. The key is to use moderation which goes for chicken noodle soup as well.

Although it’s alright to give your pet some human foods from time to time, you should observe how it affects your dog. A stomach ache, for example, is a sign that a particular food doesn’t agree with them. This should remind you that it’s better to give them food created for them and their particular nutritional needs. Honesty, something like Campbell’s soup doesn’t suit your dog’s needs very well.

Salt, onions, and garlic are not the only food dogs should avoid. Other foods considered sometimes harmful for dogs are milk and most dairy products plus raw eggs, raw meat, sugary products and fat trimmings. Since chicken noodle soup can include many of these ingredients it’s important to know exactly what’s inside. The unnatural chemicals, of course, are also not at all healthy for your pup.

Bring your dog to the veterinarian for regular check-ups if possible. Give them only the best dog food on the market and follow your vet’s suggestions. No matter how careful you are, dogs are great explorers and can still find a way to eat something they shouldn’t.

It’s a good idea to have the contact numbers of your veterinarian and the nearest emergency clinic handy. Generally you shouldn’t try to self-medicate a dog but thankfully consuming some chicken soup isn’t likely to cause much harm.