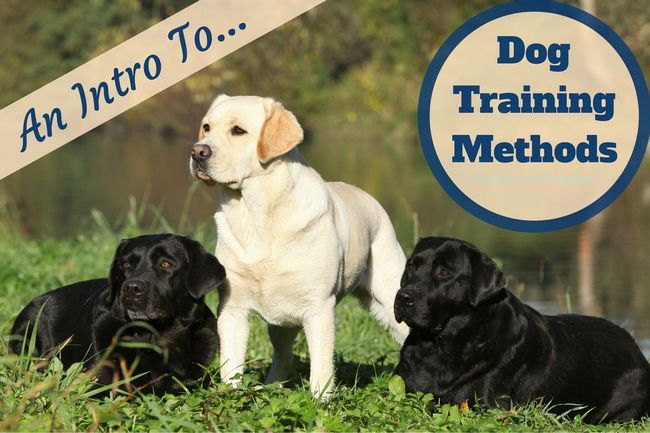 When it comes to dog training methods, there’s a much spoken saying: ‘The only thing two dog trainers can agree on is that the third one is wrong.’ And all sayings and clichés are true right? Of course I’m joking, but there are certainly a large number of named techniques and methods of dog training that exist.

But while many different dog training styles exist, they’re all composed of just a few basic concepts, it’s the application of these concepts that differ.

This article compares the most popular dog training methods, explains the terminology and gives a general overview of what’s involved.

The method or combination of methods that you ultimately choose to use in your Labrador Training regime depends on what best fits your personality type and works the best for you and your dog.

The most famous example of classical conditioning would be Pavlovs dog.

Ivan Pavlov ran experiments where a bell would be rung each time before meat powder was sprayed into a dog’s mouth. The meat powder of course caused the dogs to salivate.

Initially, the bell ringing was a completely unrelated event to the dogs salivating. But by repeating the ringing of the bell before the meat powder was given, the dogs learnt the bell ringing meant that meat was on its way. Eventually the sound of the bell alone was enough to cause the dogs to salivate.

This is an example of classical conditioning.

Classical conditioning occurs on a daily basis without us even trying or knowing. When your Labrador hears the rattle of the dog bowl, he starts to salivate, and when he sees you pick up his dog lead he gets frantically excited about going outside for a walk. These weren’t natural behaviors, they were learned through classical conditioning.

The fact such connections can be made and behaviors predictably triggered can be used to a trainers advantage, however it’s not one of the most used dog training methods in comparison to other techniques.

For those more studious and wanting a deeper understanding (it’s not the easiest read) check out the Wikipedia article on classical conditional.

Operant Conditioning – The Most Used of all Dog Training Methods 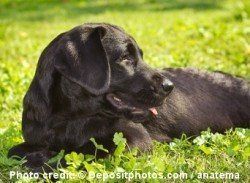 ‘Operant conditioning’ is a method of dog training based on controlling the environment so that a behavior results in either pleasant or unpleasant consequences.

If your Labrador performs a certain behavior and something good happens, he’s likely to increase performing that behavior. However, if your Lab performs a behavior that results in a bad consequence, over time he’ll learn to decrease that behavior.

There are 4 components (or quadrants) to operant conditioning. Before listing them it’s helpful to know that a ‘punishment’ reduces a behavior and a ‘reinforcement’ increases it. ‘Positive’ and ‘negative’ aren’t good and bad things, they only refer to adding something or taking something away respectively:

Video: How to Introduce an E-Collar

These methods are very effective and have been used to train dogs, dolphins, parrots, rats and more besides for many decades now.

The term “traditional training” is used to describe methods pre-dating the modern ‘science-based’ methods that (almost) everybody uses today after dramatic increases in our knowledge of how dogs think and learn.

Traditional dog training makes use of aversives, punishment, and physically coercing (forcing) a dog into desired behaviors. Most of the theory comes from dominance theory and wolf pack theory, both of which have been proven incorrect by modern science.

Traditional training kind of allows a dog to make mistakes and then punishment is given to lessen the behavior in future.

The theory goes that dogs behave badly because they’re trying to assume a position of dominant rank, and the trainer spends time asserting to the dog that the trainer is the more dominant ‘alpha’ one and must be obeyed.

Traditional trainers use corrections such as a sharp snap on the leash, pinches, grabs and ‘alpha rolls’ when a bad behavior is seen, though most do combine this with praise (and maybe even rewards) for reinforcement when the correct behavior is given.

The Koehler method is one of the more famously known and popular models of traditional training. And Cesar Millan with his dominance theories fits best into this camp.

Science Based Training – Possibly the Best of all Dog Training Methods

There’s quite rightly a lot of buzz around ‘science based dog training’ today, but it’s kind of hard to clearly define into a single, all-encompassing definition due to its wide breadth and ever-changing theories.

In science based training, a deep understanding of dogs, their nature, behavior, operant conditioning, classical conditioning, punishers, reinforcers, everything in this article and much, much more besides comes into it.

Science based dog training is constantly being developed from results of experiments by animal behaviorists and vets to try to truly understand dogs. And this is where science based training stands apart from the traditional training methods.

A science based trainer will have an understanding of the traditional methods, dominance theory and wolf pack theory. But they know these theories have been debunked and proven false, that coercion and physical punishment is unnecessary and those methods can lead to dogs with suppressed personalities and only ‘obeying through fear’.

Science based trainers try to train dogs in the most humane ways possible, taking into account the dogs psychological needs and natural ways of learning. They try to work with the dog and not merely try to rule them with an iron fist.

The majority of science based training centers on operant conditioning, but many more factors are taken into account. For example, before trying to change a behavior, everything surrounding and leading up to it is first studied and understood.

The world of science based training is so large that an entire library could be filled with the information available. I couldn’t begin to tackle the subject here fully, so for those that are interested, I can only suggest heading to Google where you’ll find many thousands of articles discussing the subject. 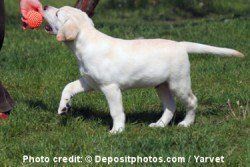 I’ve read this method can work but it isn’t usually very effective because the dog is never told that a behavior is wrong. This can result in bad behaviors getting worse because by just ignoring a behavior, we’re allowing a dog to find their own reward and hence reinforce the behavior.

For example: If your Labrador chases a squirrel and you simply ignore it, not telling your Lab that this behavior is wrong, he gets rewarded because chasing squirrels is fun. He found his own reward and will almost certainly want to do it again. The bad behavior has been reinforced.

For this reason, using positive reinforcement alone isn’t a great strategy. It’s generally agreed some form of punishment simply must be used in conjunction.

Negative reinforcement is a tricky one to describe as most times it can also be seen as positive punishment. The same action could be either depending on the view taken and the desired outcome.

For example: When walking with your dog and using a head halter, if he tries to walk right and you gently pull to correct him to the left:

Which is correct? I think it’s a negative reinforcement personally but I’m open to debate so feel free to discuss in the comment section :-)

Clicker Training – one of the Most Popular Methods of Labrador Training 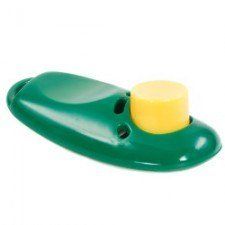 Clicker training is a very effective and highly popular type of marker training, where the clicker is used as the marker.

Clicker training uses a little hand-held device to create a sound that you use to ‘mark’ the point at which your dog completes a desirable behavior. It’s easier to more accurately mark where a desired behavior ends with a click than it is with your voice. Therefore communication between you and your dog is much better, which leads to more effective training.

So how does it work? First there’s a little classical conditioning where you mark a good behavior with a click and then treat your Labrador with a reward. After many repetitions, your lab soon associates the click with a reward, and the click itself soon becomes rewarding enough so the treats can be phased out.

Then it’s on to operant conditioning where you use the clicker for positive reinforcement, clicking every time a desired behavior is performed. By using a command and associating it with a behavior at the same time as clicker training, you can teach your Labrador obedience commands quickly in a fun and easy way.

I won’t go into too much detail on clicker training here as there are plans for an entire section dedicated to it elsewhere on the site.

This article touched upon a few of the main concepts you must use to train your Labrador effectively. The main take-away being that your Labrador’s behavior is shaped by using punishment or reinforcement.

Most people recoil in horror at the word punishment, but in the world of dog training it merely means the act of trying to reduce a behavior. It doesn’t mean being nasty to or harming your dog in any way. Some ‘punishments’ are acceptable, such as turning your back or taking time out from play.

Similarly, not all reinforcers are acceptable in most people’s minds, such as stopping an electric shock collar when your dog comes back into an imaginary boundary or stops barking.

However, to shape and train your Labradors behavior, you’ll have to use both punishers and reinforcers. It’s up to you to decide how you go about this and you should certainly be mindful of doing so in a humane and ethical way.

You can’t always praise and reinforce, sometimes you’ll have to punish but using only time outs, stern looks and ignoring unwanted behaviors is all that’s really needed.

Know that the methods you choose for Labrador training will have a huge impact on the love and trust your Labrador holds for you. By using humane and ethical methods, your dog will learn to feel safe, secure and protected around you and be more willing to work with you and learn.

I’d welcome any feedback or questions on this article so if you have any, please feel free to leave them in the comments section below. I will answer every one.