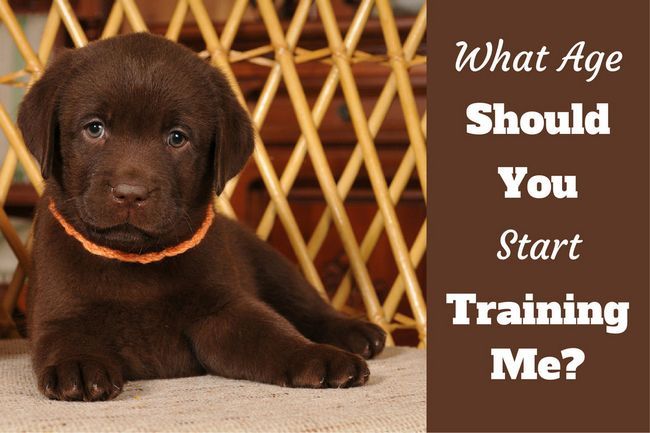 People often receive conflicting advice on what they should be doing with a young Labrador puppy, when to start training a puppy and what can be accomplished.

Many authoritative working dog trainers and authors of books recommend not starting training until 6 months of age. The general advice is to ‘let them be a puppy’ and don’t start training too young.

But then many respectable trainers and books state you should (or can) start training your Labrador as soon as you get them home at just 8 weeks of age.

They’re very opposite views so which is it? 8 weeks or 6 months?

This is a very big difference and inevitably leads to questions such as: When should I start training my Labrador puppy? What can a Labrador learn at such a young age? Is my Labrador puppy too young to train?

Where Did the 6 Month Rule Come From?

According to an article from the Association of Professional Dog Trainers: What are Some of the Common Myths About Dog Training?. The main reason for holding off from formal training:

“…originated from “old school” training where heavy collar corrections were used and therefore it was preferred that a dog be at least old enough to withstand wearing the collar and dealing with the pressure of collar corrections and punishment during training sessions.”

The use of physical aversives and corrections such as this was universally agreed to be too hard on a young puppy.

It was also proven that whether a puppy started training at 8 weeks or 6 months, they would still be able to reach the same level of skill when an adult dog and so there wasn’t much to gain from starting training a working dog so young.

And so there was an unwritten rule that for the puppy’s sake formal training would be withheld until they matured and were mentally strong enough to endure the tough training.

But with the range of gentler, positive and aversive free training methods available today it’s possible to start training your puppy at a much younger age without causing any stress.

Where Does The Advice to Start At 8 Weeks Come From?

It’s more the fact ‘as soon as you get them home’ and 8 weeks happens to be the age at which it’s recommended a puppy is taken from it’s mother and litter-mates to go to a new home. So owners don’t get their puppies before this age.

But this 8 weeks isn’t really an arbitrary number.

A puppy younger than 8 weeks old should be spending nearly all of its time with its mother and litter-mates because it learns so much about being a dog: Bite inhibition, canine communication, pack order, play, how to accept discipline and more besides. So taking a puppy any earlier is wrong and detrimental to their development.

Also, before 8 weeks a puppy just doesn’t have the cognitive abilities to learn. Their brains aren’t formed enough to be able to learn much at this stage. So it’s wrong to even try.

But here’s an interesting idea to bear in mind about what happens after getting a puppy home at 8 weeks:

Video: When to start training your puppy

Every waking minute, of every single day, whether you mean to or not, you are training your Labrador puppy!

You Are Your Puppy’s Parent, Mentor, Pack Leader and Teacher

When you get your puppy home at 8 weeks, they know nothing about the world… Nothing!

Puppies are exactly like children. They cannot take care of themselves and are naïve to the world around them. But they’re highly observant and will be studying your every move as they learn about our world.

You’re teaching them every minute of every day, whether you mean to or not.

You may as well take advantage of this innocence, when they have no idea of what life is with no preconceived ideas, no habits formed or needing to be broken, to start training them to fit into the life that they will lead with the skills that they will need.

It’s far easier to prevent problems occurring and bad habits forming than it is to solve them later in life.

So, When To Start Training a Puppy?

I believe you should start to train your Labrador puppy as soon as you get them home, from 8 weeks of age.

With modern techniques such as clicker training, shaping and lure and reward training, there are fun and easy ways to get started when they’re young in a stress free and fun way.

They’re learning all the time anyway, so you may as well take advantage and throw in some useful training…but have fun with it along the way.

But I stress this important point, to make it fun!

Never ‘Correct’ Your Puppy Or Ask Too Much of Them

If you start training your puppy at 8 weeks old, you shouldn’t expect too much of them. And you certainly shouldn’t be correcting them.

You have to think of a puppy as a very young child. A puppy is just as impulsive, has just as little self-control and just as short an attention span.

You don’t expect a child to act all grown up, eating only what they’re supposed to, playing with only their toys, staying exactly where you ask them to and listening intently to your every word doing exactly as they’re told.

You need to think the same with a puppy. They are just like a child.

A puppy will eat what they like, when they like. Go where they can, when they can. Play with and chew on everything in sight whether it’s theirs or not. And they will not be able to listen to and act on your every word.

They will have a very short attention span and no self-control. But when you do have their attention, you’ll be surprised at what they can learn.

What Rules Should We Follow When Training a Young Labrador Puppy?

It’s very easy to expect too much too soon and end up causing your puppy stress, taking the fun out of it and doing more harm than good. So…

Video: No Mugging - What to train before you start training your dog with food

It’s very important that you never correct your puppy while they’re too young to understand or do not have the mental ability to control themselves. It would be totally unfair.

It’s very important to keep any training ‘game based’ and very short, just 1 to 3 minutes max. They have short attention spans and you don’t want to teach them to dislike training by making it hard and stressful.

It’s very important to keep training tasks simple, setting your puppy up to succeed while avoiding failure. This means going very slowly and not expecting too much. Having many small wins is very encouraging. Many failures are frustrating and stressful and can kill a puppy’s enthusiasm for training and learning.

Just do very gentle training exercises for short periods of time. Hope you can have their attention but if they aren’t interested or make a mistake, let them be, don’t force it, play with them instead and try later.

What Can You Train A Labrador Puppy To Do?

Most people with a Labrador as a family pet will think of training as obedience commands and performing tricks.

But bearing in mind to ‘go slow and not expect too much’, you can’t expect a puppy to put the laundry in the basket or perform a 3 minute sit with children running around. But you can train them basic things such as:

Video: How to Start Training a New Dog FAST!

If you’d like to enjoy the benefits of a step-by-step guide to follow, that details on video every step a professional trainer takes while raising a puppy from 8 weeks through to 1 year old, there’s a course we recommend.

Doggy Dan’s ‘The Online Dog Trainer‘ has a section named ‘Project Moses‘ where via 68 videos, Dan provides a road-map you can follow to raise your puppy correctly from the moment you get them home.

It shows you in real time what to do at what ages and stages of your puppy’s development so you’re never left wondering what to do and when.

There’s much more to the course and site but instead of me waffling on, if interested you can check out all the benefits by clicking the following link:

This is without doubt the best training course I’ve found online and I believe an invaluable tool for new owners to learn how to train their dog, being taught by a renowned professional at a fraction of the cost of hiring one yourself.

When To Start Training a Puppy – See What This Puppy Can Do At Just 16 Weeks!

Although I do think this puppy is quite advanced and obviously a talented learner, this video of a 16 week old Labrador puppy is an excellent example of what can be achieved.

As well as the above ‘fun’ training, you should also be teaching your puppy these other skills from the time you get them home:

There’s differing opinions on the best age to start training a Labrador puppy and no one opinion or answer is correct. Ultimately it depends on you and when you wish to start.

You could leave your puppy to ‘just be a puppy’ and start training when they’re a few months old, or you could start right away when you get them home.

Usually if the dog is to live in a family unit, it’s best to start young as having even the smallest amount of control and manners in your puppy is important if you wish to take them places, meeting people.

But if you live out in the country, kennel your dogs outside and are fine with them just running free for a few months, they will soon catch up with the early starters and leaving them to mature before starting will not mean they cannot succeed in training.

Today’s gentle, reward based and aversive free training is kind enough on a puppy for you to start right away though if you wish.

Just be sure that you progress very slowly, never ask too much, do not correct and keep it fun.

In my opinion, in answer to the question ‘when to start training a puppy’, you should start at 8 to 10 weeks, as soon as you get your puppy home.

They will be eager to please, can learn a surprising amount, it’s fun for both of you and it’s quality time spent together that works to build the love and trust your puppy has for you, building a strong relationship.