Some dogs have a problem with men. That’s the long and short of it. As a guy, this isn’t something to take personally, but it’s understandable if the dog has suffered abuse at the hands of a man (not to say that men are always the ones abusing dogs — that’s untrue) or if the dog has a behavioral alpha-male problem that causes him to dislike men. Either way, managing a dog’s dislike of men does take some behavioral finagling and retraining, but it can be managed.

First and foremost, it’s important to separate the root cause and trigger of the dog’s dislike from the actual people with whom the dog is coming in contact. Don’t take a dog’s distrust of the male gender as something personal against the individual man now present. A dog’s problem with men often stems from a past issue or trauma that causes him to see all men in a negative light.

Why Some Dogs Dislike Men and What To Do About It

When afraid, dogs will tuck their tails between their legs, hunch over, go limp, and try to hide. They might also whimper and whine in fear. On the other hand, if a dog dislikes someone, he’ll express it more vocally and bellicosely, barking and growling in a very distinctive, crouched, aggressive pose. 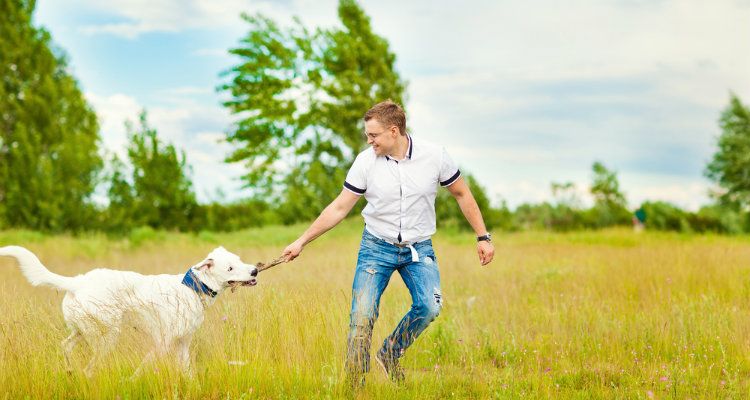 Your dog might hate men for many different reasons. He doesn’t necessarily have to have been abused to have a distrustful impression of men. Shy dogs are often more afraid of men than of women simply because men look more threatening regardless of how nice they are to the dog.

“Maleness” is more solidly defined in the canine world than in the human world where gender stereotypes and roles are becoming less rigid and constrictive. A dog identifies a masculine presence as having a more assertive walk, being larger in both width and height, and having lower, louder voices. A dog who’s already intimidated might find men more threatening than women because they feel that men have the more intimidating physical characteristics.

Although a dog doesn’t have to be abused to dislike men, that doesn’t mean that abuse can be ruled out as a factor. If in the past, a dog has been repeatedly mishandled and mistreated by a male, he will have associated masculinity with something negative. Because a dog can’t necessarily recognize immediately that the man approaching him is not the one who abused him, he might assume that all men mean him harm even though that’s not the case.

Another reason your dog might not like men is because he sees men as threats. This doesn’t mean that he feels threatened because he thinks this man could harm him but rather that the man could displace him from what the dog views as his power seat in the house. If you let a dog get the impression that he is “alpha,” it can cause problems when he encounters a man he thinks is threatening his self-declared position as king of the house.

×
Thanks for subscribing! Please check your email for further instructions.

Video: This Is Why Your Dog Hates The Mailman

A dog who thinks he’s the alpha will probably exhibit behavior such as preceding you through the door, acting truculent and stubborn, refusing to wear a leash, getting on the furniture even though you tell him no, objecting to having his head, shoulders, and back touched, and becoming unreasonably angry when he feels he’s been disturbed while eating.

Your dog might also try protective “guarding” behavior by getting in your way and trying to protect you from everything, most of which you don’t need protection from. A protective dog who sees men as a threat might stand in front of you when a man approaches, bark or growl if a man comes near you, and/or just generally make himself an obstacle between you and an approaching man. Though it’s rather endearing, it can also be inconvenient and annoying. 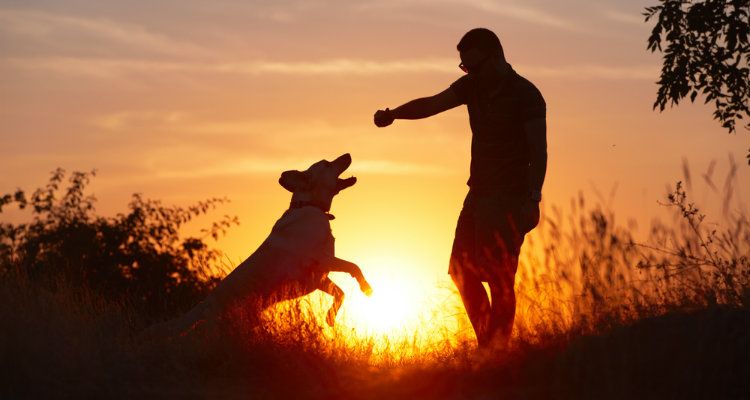 What to do if your dog dislikes men

If your dog dislikes men, the key is to find the trigger. It could be former abuse, a need for dominance, or just general shyness. If your dog was abused or intimidated by a man, you need to help him understand that the masculine figure is not inherently threatening. Hand feed your dog and make him comfortable. When you introduce him to a man in an attempt to curtail his fear, ensure that the environment is quiet and calm and that he is surrounded by things he likes.

Once you’ve made sure your dog is calm, have a man enter the room but stand at a distance with a dog treat in his hand. Observe your dog’s reaction. If he’s relaxed, have the man move a little closer. If your dog begins to panic, have the man stand completely still and then slowly get down on his knees or in a low position, which makes him less threatening.

Go stand by the man and take your dog with you, petting him and giving him treats. If you’re there, he’ll likely be a little calmer. Reintroduce the man to your dog until the man’s appearance becomes routine and the dog no longer views him as a threat.

Bribery works when it comes to dogs. If you can get your dog to associate men with positivity, that will eliminate the problematic fear-based behavior. Rewarding your dog for gradually behaving more favorably towards men is important because it will condition him to associate masculinity with positive rather than negative influences.

If your dog is exhibiting dominance and protective behavior, that’s a sign that he has likely gotten the wrong idea about exactly what his place in the house is. You’ll need to assert your authority over your dog by issuing clear, calm commands and not allowing him to manipulate you.

No one wants to be afraid of things, and dogs are no exception. Improving your dog’s relationship with men will do wonders for his mood, behavior, and quality of life.