It is a respiratory condition common in dogs and which is normally triggered by a spasm in its soft palate and laryngeal area. During the spasm, the dog gasps air inwards heavily instead of this being expelled like happens in normal sneezing. Though alarming to the pet’s owner, reverse sneezing in dogs is harmless in itself. It can however be indicative of other serious problems.

When reverse sneezing occurs, the dog can be seen making rapid inspirations, standing still and trying to extend its head as seen in a video later on in this post. Snorting sound can also be heard and you can easily mistake the dog for having something caught in the nose. In addition, a dog in a reverse sneezing bout will:

Reverse sneezing in dogs only lasts a short while and will tend to end without posing any risk to your pet. Both before and after a reverse sneezing episode, the dog will appear okay and rarely require medical attention. They will remain conscious all through.

Wondering what causes reverse sneezing in dogs? Well, reverse sneezing can be experienced in any dog irrespective of breed or age. In most cases, the cause of reverse sneezing is irritation on the soft palate which extends to the throat. When this occurs, the dog will stretch the neck outward as the chest expands in a bid to inhale more. During this episode of spasm, the trachea narrows down and getting enough air to the lungs becomes hard. As all this happens, the dog produces a honking sound.

In addition to this, other causes of reverse sneezing include a cleft palate. Bronchial infections could also see a dog suffering the same. In puppies, involuntary movement of cilia (hair-like lining of the respiratory tract) which are meant to eliminate foreign substances to prevent them from reaching the lungs can cause reverse sneezing in your dog.

Where the reverse sneezing is in older dogs, the cause could be dental illnesses or nasal tumors. Obstruction of the nasal passage, excess nasal secretion, mucus irritation, inflammation, gastrointestinal disease, chronic vomiting and pneumonia are among other causes. Additionally, the factors listed below can lead to the physical reflex:

Where a dog experiences a reverse sneeze at night and when sleeping, it is possible that they got a foreign object into their nasal cavity. It is also likely for the dog to be suffering nasal inflammation. To be certain about the cause of the night time reverse sneezing, talk to your veterinarian.

The time of the year may dictate how frequently reverse sneezing in dogs occurs. During autumn when there is a flare up of allergens, it is likely for your dog to sneeze a lot especially when let outside. This constant reverse sneezing can be stopped by knowing what allergens are causing it and eliminating them. In case the spasm keeps increasing in severity, duration and won’t stop, visit the vet.

All dogs can experience reverse sneezing but there are specific breeds that are more prone to the condition. Flat faced pooches such as boxers and pugs reverse sneezing is common due to their naturally elongated soft palates. Occasionally the palate gets sucked into the throat as they inhale causing reverse sneezing.

Video: Does A Dog Really Cure Your Asthma?

Smaller breeds such as yorkies and beagles also tend to experience reverse sneezing more. This could be attributed to the small size of their throats. 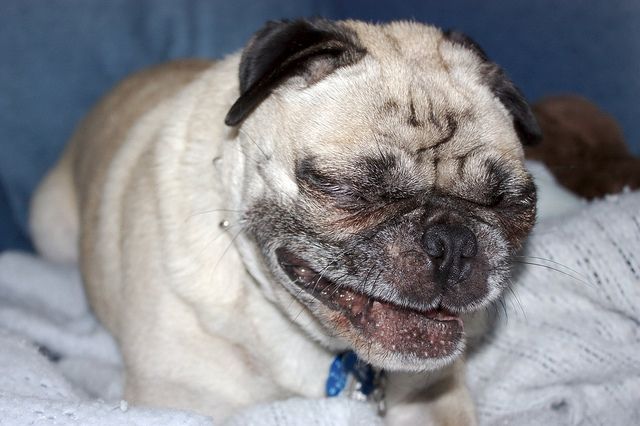 While some dogs have reverse sneezing episodes all their life, others develop it as they age. Unvaccinated and under vaccinated dogs tend to be at a higher risk of developing general infections which makes them vulnerable to consistent sneezing.

My dog keeps reverse sneezing, what should I do?

In most cases, reverse sneezing in dogs is a temporary and occasional problem. It goes away on its own leaving no after effects and without the need for treatment. No dog reverse sneezing treatment is necessary as once the spasm is over, the episode is done and no harm is implicated on the dog.

There are no specific medicines or home remedies that can help stop the spasms. However, where the reverse sneezing in dogs is as a result of a medical condition, treating it can help ease the reflexes. Once you know what triggers reverse sneezing, it is time to resolve that to minimize the episodes.

If you still feel like you should intervene during the episodes, here is what to do for a reverse sneezing dog to make it feel better or where the episode seems to last a little too long.

With your hand, gently massage the throat to stop the spasm. Covering up its nostrils for a moment also helps by making the dog swallow so as to clear up the irritant. You could also press the mouth shut so as to only have the nostrils as the only point of inhalation and exhalation.

When to See a Vet for Reverse Sneezing in Dogs

While we have indicated above that reverse sneezing in dogs requires no treatment, it is important to learn how to tell when to seek medical help. While the sneezing may seem obvious, it is possible to confuse it for something else. See your vet under the following circumstances: