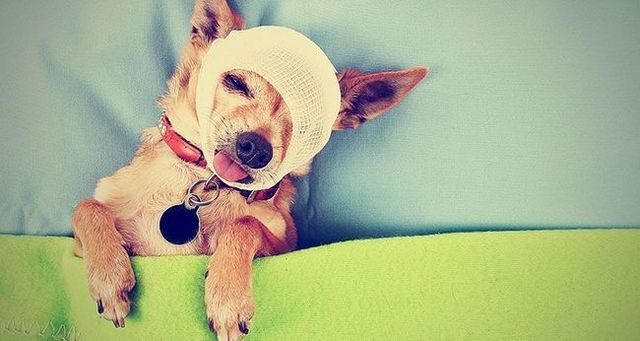 Video: How to Tell if Your Dog Has a Broken Leg - Six Dog Broken Leg Symptoms

When people are in pain, it’s pretty hard to miss most of the time. We complain about our aching back. We yell out because we’ve stepped on something pointy. We limp because it hurts to put pressure on a leg. We lay down in the middle of the day in complete silence and darkness because we have a migraine.

Dogs, unfortunately, aren’t always quite so easy to read. First off, to start with the obvious, they can’t tell us if something hurts because of that whole not-talking thing. And while things like limping or whining every time they put pressure on an area are pretty sure signs of a dog in pain, symptoms aren’t always so clear — especially if your dog is of the “walk it off” type.

Video: 8 Secret Signs Your Pet is in Pain

Related: When to take a dog to the vet ASAP

Video: 5 Signs Your Dog is in Pain

Still, there are a number of more subtle things that you can watch for if you’re worried that your pooch might be hurting more than she’s letting on.

Excessive vocalizations
Even if they’re trying to be tough, dogs in pain tend to be more vocal, but unless this is paired with a specific physical action, it’s not always easy to spot immediately. A hurt dog may express this vocally in a number of ways: whining, whimpering, yelping, growling, snarling, and even howling. If he’s vocalizing more than normal, see what’s up.

Constant localized grooming
Dogs in pain will often lick their paws constantly in an attempt to sooth themselves. When dogs are hurt, one of their first instincts is to clean and care for the wound by licking it as well. This is obvious if it’s a visible wound like a cut, but often even when pain is internal, dogs will lick that area in an attempt to fix the problem. Dogs will also lick theirs paws to rub their eyes if they have eye pain. If you notice excessive self-grooming in general, seek the help of a vet.

Differences in sleeping, drinking, and eating
Many dogs will sleep more when in pain because they’re trying to heal or because it’s too hard to move around. In this vein, a loss of appetite and changes in the way and amount they drink are common.

Altered breathing
Is your dog panting even though she hasn’t been exercising? Do her breaths seem faster or shallower? These things can be signs that it hurts her to take a breath.

Changes to the eyes
Dogs with eye pain frequently squint. Additionally, you might notice that his pupils are smaller. For pain in other parts of the body, the opposite is true — the pupils get bigger.

Difficulty resting
If your dog is hurting, it can make it difficult to sit or lie down. Because of this, you should check them if you notice they are sitting or lying in an unusual position or seem to have trouble staying put. For example, they might keep trying to sit or lie down and almost immediately get up and move around again.

Aggressive behaviors
Ever heard the expression, “Like a wounded animal?” Well, there’s a reason. When animals are injured or otherwise in pain, many will go into protection mode and try to get you to stay away because they’re worried you’ll hurt them. This may mean that your normally docile dog suddenly starts growling, pinning his ears back, and even biting if you do something that worries him. Typically aggressive dogs sometimes show the opposite behavior.

Obviously, most of these symptoms can mean several different things, so you don’t just want to assume your dog is in pain. As long as your dog isn’t acting aggressively, one thing you can do to check is to poke and prod (gently but firmly) around their body — just like your vet does. This can help you to localize the source of the pain, but be careful — otherwise docile dogs will sometimes bite when hurt if you touch a sore spot.

If you find something that seems worrisome or the odd behavior continues, see a vet immediately to diagnose the problem.

How were you able to tell that your dog was in pain in the past?