Video: Why do dogs eat grass? 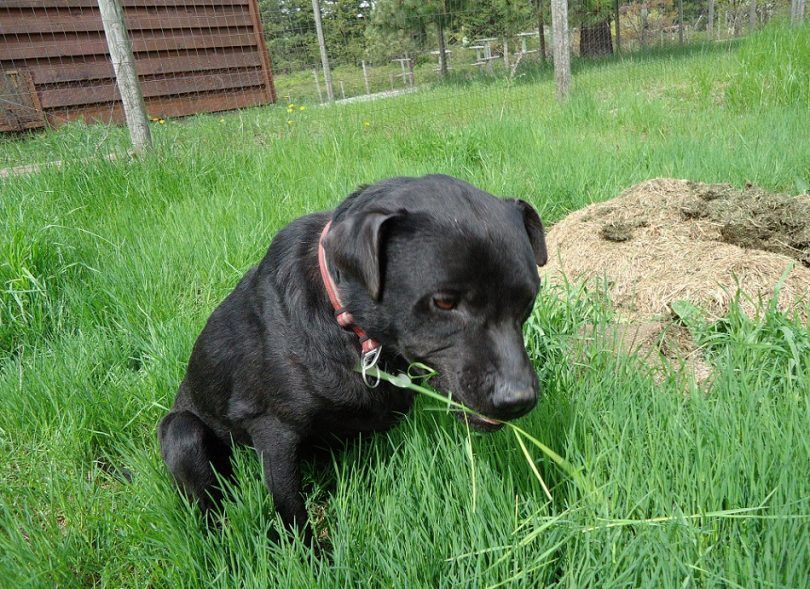 Seeing your dog or a friend’s dog eating grass is surely something you have already experienced and ended up asking yourself, “Why does my dog eat grass?” It is definitely a type of behavior that you find strange since it is known that dogs are carnivore animals. However, wolves, dogs’ ancestors, used to occasionally eat grass too. Some people believe that eating grass is a bad habit for dogs that must be eliminated. Others say that dogs need grass in order to calm their stomach by vomiting, but there are many varied reasons, which are not considered harmful at all.Evidence suggests that most dogs eat grass and they do not look sick before they do it. In fact, according to multiple dog owners, less than 10% of dogs seem sick before they start eating grass. In addition, grass eating does not usually lead to regurgitation. Less than 25% of dogs that eat grass vomit a while later. Therefore, there is not a strong connection between grass eating and stomach problems in dogs although that is one of the reasons as well. The study that revealed this information was conducted in 2008, by dedicated researchers at the University of California.The ancestors of the dog vs the modern dogWhy does a dog eat grass since this quadruped has a natural tendency to be carnivorous? Its teeth, digestive system and behavior clearly confirm this fact. Even so, dogs have the ability to eat a variety of things. For tens of thousands of years, the ancestors of the dog were opportunistic predators, devouring anything as long as it met their basic food requirements.Modern dogs are not like their ancestors that devoured their prey completely, including the contents of herbivore animals’ stomachs. These days, dogs look for plants as an alternative to their daily diet. The most sought-plant is the grass, mostly because that is usually easy to find. 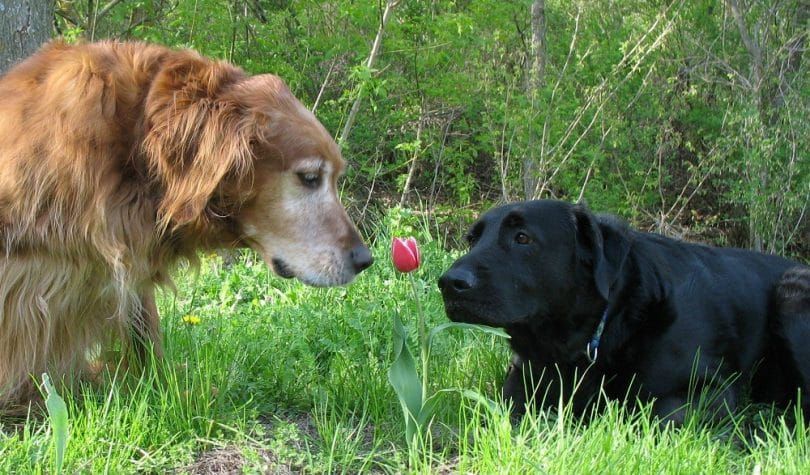 Besides grass, dogs also eat fruit, berries and other vegetables. Therefore, it is clear that dogs can find and use the nutrients from a wide range of plants and herbs, but that does not explain why some dogs vomit after eating grass.Causes of grass eating in dogsThe occasional or constant intake of grass or other plants by dogs can occur due to several factors, among which are those detailed below. Remember that dogs are born with survival instincts, so if you see them eating grass, do not try to stop them, as they definitely have their reasons. There is one situation when it is not recommended to let your dog eat grass, but that is only applicable in case you know for sure that toxic substances were used to spray that area in order to avoid certain dangers. Otherwise, eating grass is quite safe and harmless.Poor digestionIf a dog has bad digestion, stomach pain, has eaten something it should not have eaten and so on, it is very possible to see it vomit after eating some grass. In this way, a dog can regurgitate whatever is in its stomach that is causing it pain or discomfort. When a dog has a swollen stomach, upset stomach or gas, it will seek a natural remedy such as grass, which seems to be effective. When a dog ingests grass, its texture tickles its throat and stomach lining. This ticklish feeling is the one determining a dog to throw up, especially when it swallows the grass without chewing on it.Grass eating may also be determined by a behavioral disorder called PICA. Pica can occur due to several factors, among which is the lack of nutrients. It could be that your dog is experiencing an imbalance in its diet and lacks of certain vitamins and minerals that it tries to obtain by eating grass.Another cause of Pica is chronic gastritis or stomach pain, both of which can be relieved by vomiting. Last, another cause of Pica is a state of stress and anxiety that comes from lack of mental or physical activity. These states determine a dog to start licking, biting or eating random objects. 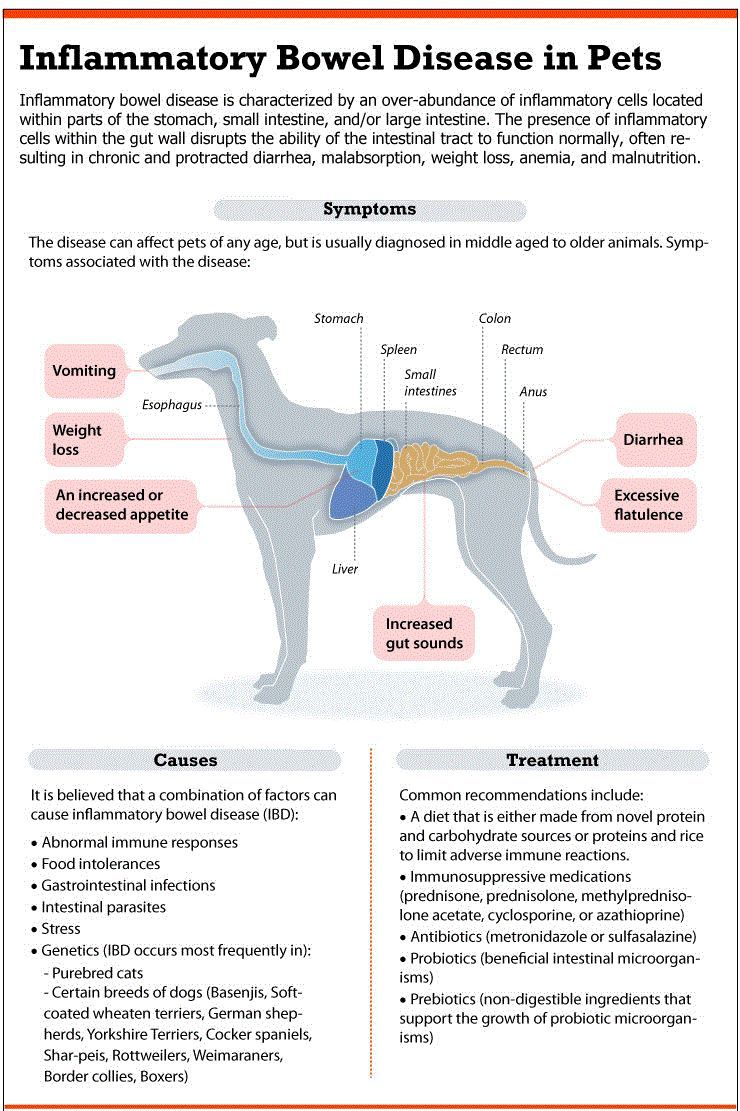 Vomiting occurs when a certain degree of inflammation is achieved in a dog’s digestive system after consuming grass. An underlying disease, including the inflammatory bowel disease (also known as IBD), the gastrointestinal parasite infestation, a metabolic disease (which affects the kidneys, the liver and the pancreas) or Pica can stimulate the physiological urge to vomit in dogs.Therefore, dogs can eat grass as a means to facilitate their own vomit and to reduce nausea. The leaves of both small and large herbs often cumulate in the stomach of a dog instead of moving properly in its small intestine before being excreted.Lack of nutrients or fibersSome dogs eat grass as a food supplement, regardless of the quality of their diet. If a dog eats grass, this does not mean that it is poorly nourished. Veterinary behaviorists and nutritionists speculate that dogs eat grass to make up for nutritional deficiencies. Many dog owners introduce fresh vegetables and fibrous vegetables or fruits in the diet of their dog in order to make sure they do not lack anything. Spinach, kale, broccoli, parsley and pineapple make great additions to a dog’s diet. 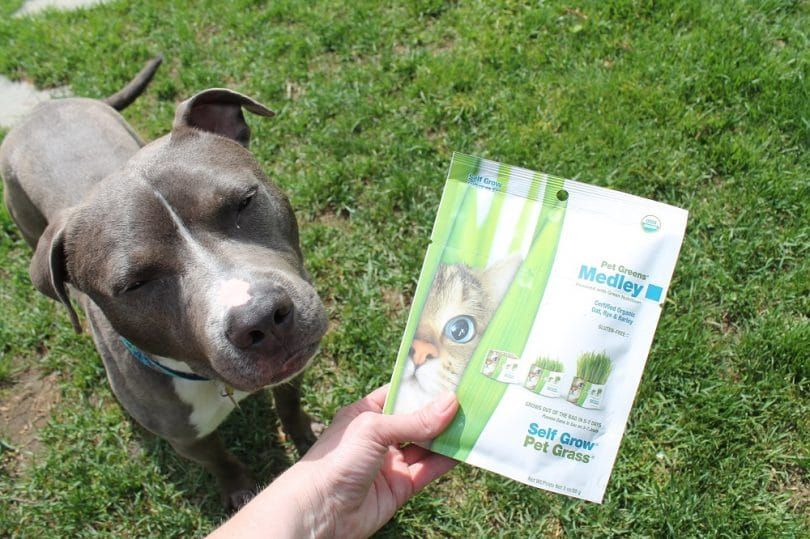 Vegetables are more acceptable and digestible when they are steamed and pureed or finely chopped before they are added to special dog food. However, it was shown that dogs fed with homemade food also have the tendency to look for grass and eat it.Evolutionary habitsDogs eat grass simply because they instinctually feel like it. Eating grass is a behavior exhibited by both wolves and domestic dogs. It is said that if a wolf’s mother or a dog’s mother eats grass during pregnancy, then its baby wolves or puppies will also eat grass during their lives on more than one occasion. So, this type of behavior can be influenced genetically, case in which it is no longer necessary to search for an explanation. The Journal of Veterinary published an article that shows how mothers can be partly responsible for their babies’ behaviors in case of grass eating.Other reasonsSometimes, when a dog has no fresh water at its disposal and the grass is nice and cool, especially in the morning when there are water drops on the grass, it is tempted to eat some in order to quench its thirst. Of course, this is a particular case and it might not be your fault. For example, you might walk your dog during the morning and observe this behavior. It is unlikely for a dog to refuse drinking water and prefer to ingest grass instead if it gets thirsty. Grass eating is an exception in a case like this one.The relation between grass eating and vomitingMy dog eats grass and vomitsAs noted, this is completely normal in the canine world. If your dog has a stomach ache, poor digestion, or it has eaten something that cannot be digested, such as a small ball, stick, plastic and so on, it is very likely for it to start eating grass or other plants until it vomits. This natural behavior is meant to relieve pain. When a dog vomits, you should watch it carefully because it might choke on the objects it is trying to get out. 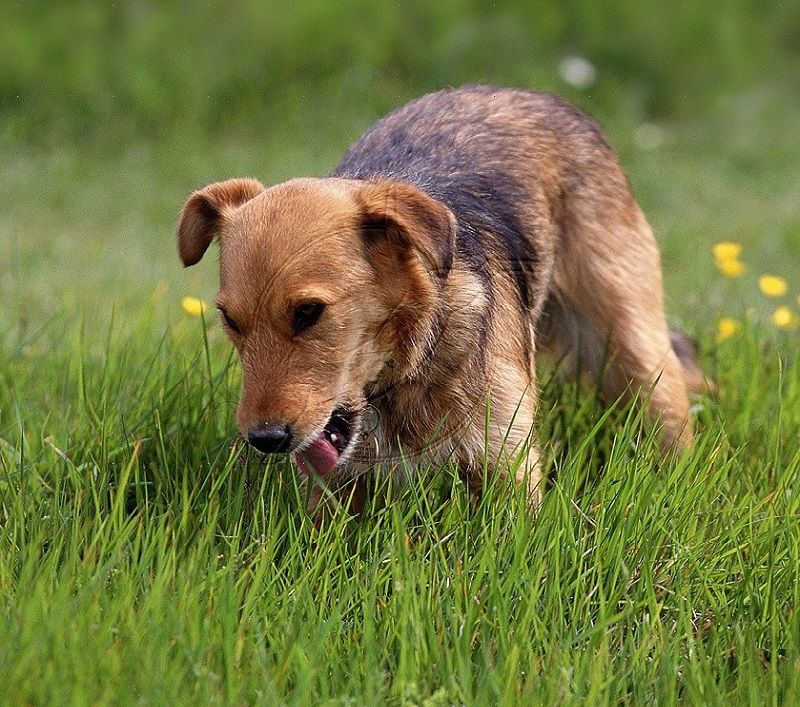 Always be ready to intervene, but do not do anything if everything goes well. In addition, keep in mind that if your dog eats grass for more than 2 consecutive days, then it might have a more serious problem and you should take it to the vet. The specialist might discover digestive diseases or nutrition problems that you should not overlook.My dog eats grass without vomiting afterThere are several theories regarding the reasons a dog has to eat grass. However, there is another theory according to which dogs eat grass because they simply like its taste. For some dogs, there is nothing more appealing than a fresh, full of water, sweet taste of grass. This is because it quenches thirst, it stabilizes the glucose levels from a dog’s body, it lowers stress levels and it also has a pleasant taste.Thanks to the regular movements of mastication, the release of endorphins is triggered, fact which fills a dog’s body and mind with happiness. Also, a dog that likes grass will chew it slowly and it will not eat too much of it.The danger of herbicides and pesticidesAlthough most experts agree that eating grass is not harmful to dogs, one thing to keep in mind is that certain herbicides and pesticides used to spray lawns can be very toxic, especially if they are ingested. In fact, fertilizers are one of the 10 leading causes of poisoning in dogs. In addition, there are toxic plants, which could lead to problems if your dog chews and swallows them. Therefore, make sure that there are no toxic substances on the grass that your dog eats. 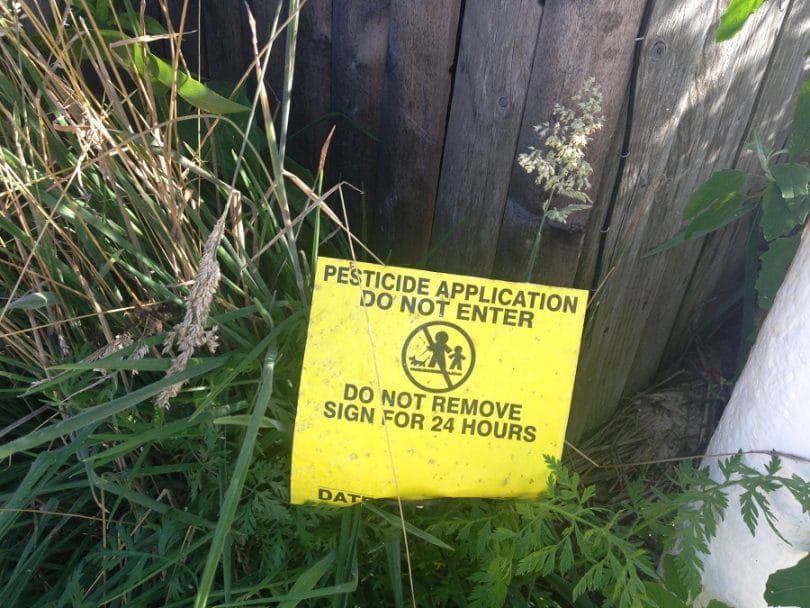 You could buy special, natural grown grass for it and put it at its disposal. That usually comes in a flower pot. There are a few plants that must be avoided, such as azalea, daffodils, hydrangea, poinsettia, mistletoe and rhubarb.Data from the journal Applied Animal Behavior ScienceThere is only one scientific study that addresses this issue. It is relatively recent, from 2008, and it was conducted by researchers at the University of California and published in the journal Applied Animal Behavior Science. They conducted a comprehensive survey of dog owners who provided them with 1,571 data sets with the following results:68% of the dogs ate grass daily or on a weekly basis, which was a very common incident8% of dog owners said that their dogs showed signs of sickness before eating grass22% of the dogs vomited after eating grass regularlyYoung dogs ate more grass than older dogs and they did not seem sick before or after eating itDogs that looked sick before eating grass vomited a while laterDogs with a diet that included vegetables and fruits were not less likely to eat grass. So, the idea that grass eating is meant to compensate an absence of nutrients is not sustained.The vet’s opinion mattersAs stated earlier, grass is not harmful for dogs, but it can be covered in herbicides or pesticides, case in which you should be extra careful with your dog. Consulting the vet about the reasons your dog consumes grass is optional if that only happens rarely.However, if your dog ingests grass for more than 2 days in a row, then you can take it as a sign that something is wrong and in this case it is mandatory to consult the veterinarian. Sadly, a dog cannot say why it consumes grass or what makes it sick, so you will need to receive a positive answer from a vet regarding its preference for grass.Conclusions for omnivorous dogsTheir origins, instincts, sicknesses and other factors determine some dogs to eat fresh grass. Some of them like it, while others just need it. Dogs are different and so are their needs. What you need to keep in mind is that natural grass is not harmful for your dog. It only becomes a problem when your dog eats it constantly. 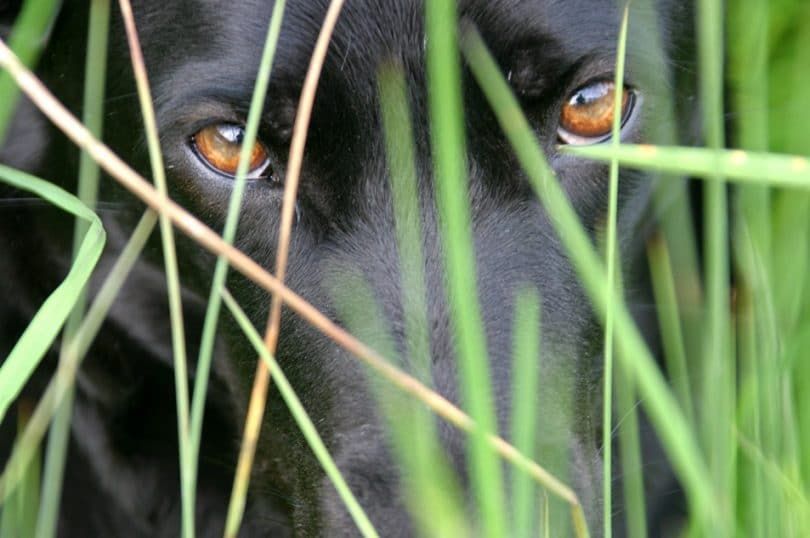 In fact, if you notice that sign, you should wonder what determines your dog to eat it so often. The answer is relatively easy to obtain if you take your dog to the vet. Carefully observe what your dog does from time to time.If you have a big yard, do not let it unattended all day long because you might overlook important details from its behavior. Sometimes, a dog is like a baby that has to be supervised and that needs special attention. Think of its well-being when you choose your walking route and look out for parasites as well!