If you`ve heard the term `Designer Dogs` you might not be exactly sure what that means.

Although the tag `designer` is applied to tons of different products, we don`t necessarily expect it to apply to living creatures!

In a nutshell.... the term `designer dog` covers any puppy born from two purebred parents... of DIFFERENT breeds. 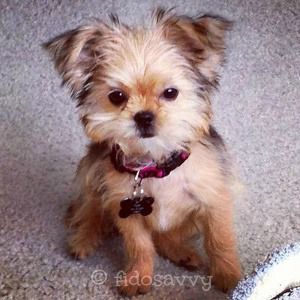 Probably the most easily recognizable examples are:

The cute little guy to the right is a Shorkie puppy - a cross between a purebred Shih Tzu and a Yorkshire Terrier.

Now, you might already be already asking yourself "so, what`s the difference between a designer dog and a mixed breed?"

Any dog that wasn`t purebred used to be thought of as a mixed-breed.

But now, a mixed breed pup is generally considered to be the result of the blending of a number of different breeds because one, or both, parents are mixed breeds themselves.

The heritage and ancestry of mix breed puppies is often hazy at best, and most likely a totally unknown quantity.

In contrast, the background of designer dog breeds/hybrid dogs, has a definite structure:

Then there are what`s called `backcross` puppies:

The Pros & Cons of Designer Dogs

It`s kind of a mixed bag when it comes to this, and there are strong opinions on both sides of the fence.

It`s well known that every purebred dog breed is troubled by at leastone (and usually many more), genetic or hereditary illnesses orproblems. This is due to the level of inbreeding that takes place inorder to keep a breed `pure`.

However, it`s very important to pay attention to the specific purebreds that are producing a particular hybrid.

Forexample, if you cross breed two purebreds who each have apredisposition towards eye and eye-lid problems (such as Pugs, BostonTerriers or Pekingnese), the puppies are very likely to have problems inthis area. And they may be more serious than in the original breedsthemselves.

The Best Of Both Worlds?

Admittedly one of the first designer dogbreeds was the Labradoodle, which was originally bred to combine twoindividual, breed specific traits with a particular purpose in mind.

It works quite well intheory, but due to the nature of genetics, it`s not always a `surething`!

An F1 (first generation) Labradoodle or Goldendoodle can have alab like coat that sheds, an F2 is more likely to have a hypoallergenic,low to non-shed coat.

It`s alsonot safe to expect puppies from a certain breeding to get only thedesirable physical/behavioral traits.

They`re just as likely to inheritthe undesirable ones, and each individual puppy in the litter can bequite different from it`s litter mates.

Be realistic whenconsidering a hybrid puppy, and if there are characteristics in eitherof the foundation breeds that you really don`t want in your dog, don`tchoose that particular combination.

With purebred dogs you have a pretty accurate idea of your puppy`s eventual size, coloring and breed characteristics. With mixed breeds it can be a complete lottery!

They`renot as predictable as a purebred dog, but F1 andF2 generation hybrids will show a selection or combination ofcharacteristics found in the original purebred dogs that founded the new`breed`.

It`s also important to realize that each individualdesigner dog breeders` stock will vary from those of another breeder, asthere are no recognized `breed standard` to adhere to (as there is withpurebred dogs).

The `look` of each hybrid is less`standardized` than that of a mainstream purebred.

There are lots of reasons why you might want to get DNA information on your puppy/dog....

Perhaps you want to be sure that the purebred you bought (but who doesn`t have `papers`) isn`t a mixed breed after all.

Other times it`s to get info. that might help diagnose an unexpected health issue, explain behavior, get more background on a newly rescued dog, or just out of simple curiosity.

There are simple, ready-to-use, DIY tests that can help you learn more about thegenetic background of your dog, right from your own home.

All you need to do is use the kit to take a simple mouth swab, send it off to a lab, and wait for the results :)

can even tell you if your little guy is truly and F1 (first generation cross) or not.

can give you lots of information about your mixed-breed`s family tree.

This type of information is very important for lots of reasons, including..

Health: Every breed has a predisposition to certain canine health issues and being aware of this can help you protect your pet and make sure he gets any screening he needs as well as being ready and able to recognize symptoms should they arise.

Behavior & Training: Just as health issues are genetically transmitted, so are a lot of in-born breed characteristics and behaviors. It`s easier to keep your pup happy and well-behaved if you understand how he `ticks` and tailor your training, corrections and daily routine to his needs.

Designer dogs are not generally considered `recognized breeds` as such.