Puppy crate training and whining often go hand in hand, but thatdoesn`t mean that you should stop using this house training method.

A certain amount of noise and complaining is absolutely normal and it`s important not to let it spoil your puppy potty training efforts.

Crate training works so well because dogs are den animals by nature, and the desire to keep their den clean is a strong one!

If you`re worried that using a crate to train your puppy is `unkind`, please don`t be.

As long as your pup gets lots of out-of-the-crate time, love, attention and exercise, crating him won`t cause him any harm or scar him emotionally!

I`ve raised, trained and cared for numerous puppies and although many of them complained and fussed, as most puppies do, not one of them failed to grow up to be a happy, friendly, confident and well-mannered (not to mention fully potty trained) dog!

Why Is My Puppy Whining In His Crate?

ALWAYS make sure Fido has had a potty break right before you put him into his crate.

Then, if he`s been in there quietly for more than 20 - 30 minutes and starts to complain get him out and take him to his potty spot right away... he probably needs to `go`.

If he doesn`t do his business, then at least you know that that isn`t the problem.

If he`s had his potty break, but begins to complain the minute you close the crate door, then the fussing is simply because he wants to be free, that`s the kind of whining you ignore.

It`s important to differentiate between `nuisance whining` and the type of noise your pup makes when he needs a potty break (see grey box to the right).

General complaining and whining (even barking or howling) doesn`t mean that Fido is being emotionally traumatized or that he needs out of his crate `right this minute`.

It`s just his way of letting you know that he really would prefer to be right next to you at all times!

Dogs aren`t just `den` animals, they`re `pack` animals too.... and in the wild a young puppy`s survival depends on staying with the pack for food and protection.

Although your little guy is a domestic dog - meaning that his meals come on time and there are no wild animals threatening his life - his urge to stick with the pack is still a strong one.

When you put him in his crate it makes him anxious and he shares his feelings with you by complaining.. sometimes loud and long.

Because you know he`s okay, you can safely ignore the whining he`s doing because it`s important that he learns how to be alone for short periods, that he`s perfectly safe, and that you will always come back for him.

ALL puppies are different, and while some may accept their crate from Day One and barely utter a squeak about it, others may object loudly... and keep it up for hours, days or even weeks. 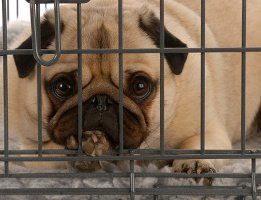 A strong-willed, stubborn puppy can wear you down over time so it`s really important to remember that there`s a reason why you`re using a crate and that it`s in your pup`s best interests to learn to accept it.

If your nerves are getting jangled, walk away. Put in ear-plugs, put the crate in another room and close the door, get busy with something that will take all your attention.... in other words, IGNORE the whining and fussing. Completely.

Most of the time, once a pup realizes that his fussing and complaining is falling on deaf ears (and it won`t get him out of his crate and cuddled) he`s going to decide it`s a waste of effort and turn his attention to more interesting past-times... such as playing with the tough chew toys you`ve put in his crate with him, or taking a nap.

Over a period of time, his complaints will get shorter each time you put him in his crate and eventually he`ll stop making a fuss altogether.

When your brain is full of the sound of your pup`s cries this can be hard to believe, but I promise you it`s true.

I`ve crate trained a LOT of puppies and have never had one continue to make a huge fuss for longer than a few weeks (but one GSD pup did complain in a fairly low-key but persistent way for a couple of months).

Ignoring the noise is the best way of dealing with puppy crate training induced whining, but if you feel as though you must say or do something, then a firm verbal `Quiet Now` might help - or it might not.

Some pups are comforted by your voice, others just get more wound up, you`ll only find out how your puppy reacts by trying it.

If you`re at the end of your tether with the noise, you can try a `shake can` deterrent.

This is basically an empty soft-drink can (or something similar) which is filled with dried beans/small stones/marbles etc. and then taped closed firmly. When you shake it there should be a loud-enough noise to startle your pup.

You can use this in conjunction with the verbal warning by shaking it in front of the crate door, or knocking on the top of the crate (if it`s a hard-sided plastic crate) with it.

But be careful not to scare him. A crated pup or dog feels vulnerable and can over-react either defensively or by getting very scared, you don`t want you little guy to build up those associations with his crate. So tread gently and carefully.

Yes, sometimes it can be... but in young puppies most often it`s not.

However it is important to know how to recognize separation anxiety in a puppy.

It`s normal for any puppy to feel a bit scared or lonely while he`s getting familiar with his crate, but occasionally some puppies are actually terrified and their anxiety levels are sky-high.

They may throw themselves around inside the crate, scrape or bite at the door or sides, howl/whine/bark frantically, pant, drool and even lose control of their bodies and pee or poop.

For new owners it can be tricky to tell the difference between nuisance whining and fussing and true separation anxiety behavior.

A `normal` pup might bark, howl or whine in a way that sounds frantic and may even throw himself at the crate door, or bite/scratch at it to begin with.

The biggest give-away with this is how long the behavior lasts.

Mostpups who are just normally anxious, upset or irritated, will gradually `wind down` their complaints and stop the physicalassault on their crate within 10 - 20 minutes or so.

Although the noisemight continue for much longer on a more muted, or intermittent, scale.

A pup with real separation anxiety issues will keepup the frantic noise and activity indefinitely, usually panting/droolingand eventually messing in his crate.

Severe problems like this are rare, so when you`re crate training andyour pup is whining, don`t assume he`s truly terrified, the odds arewell against that - he`s most likely just letting you know he`s nothappy about the situation.

There are things that you can do to help prevent separation anxiety in puppies, and also simply ways to reduce his fears about being left alone.

Video: Puppy Training-Puppy Screaming and Whining in the Crate

You can find out more about preventing and treating this problem on my Puppy Separation Anxiety page.

If you have an older dog who is displaying this type of anxious behavior (it tends to be more common in adopted/shelter dogs who obviously have reason to be afraid of abandonment!) you`ll need some extra tips and advice to help him overcome his fears.

Check out my Separation Anxiety In Your Dog page for lots of help and information. 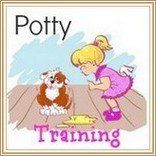 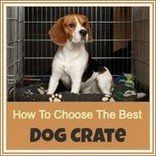 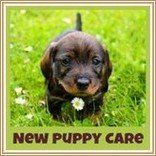