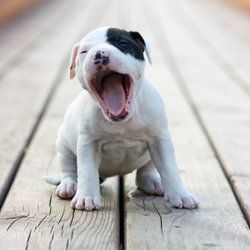 Puppy separation anxiety can be a significant behavior problem and it`s important to be able to tell the difference between normal puppy `complaining` and acute emotional distress.

Well, don`t worry too much because all of these behaviors are perfectly normal and it probably doesn`t mean that you have a puppy who`s in the throes of separation anxiety.

To understand why he acts like this, think about things from his point of view.... your pup is just a tiny baby and in the last few days he`s had to......

That`s a lot for anyone to handle, so it`s not surprising he`s feeling a bit nervous!

True separation anxiety (SA) IS a real condition, and somewhere between 10% and 14% of dogs suffer to some degree.

Puppy-mill and pet-shoppuppies are more likely to have behavior problems in general, and somebreeds tend to be more nervous and highly strung than others.

Witholder dogs, those who have been abandoned, neglected or mistreated tendto have a higher incidence of SA (not surprising of course, as theyhave reason to be afraid of being abandoned).

A traumaticexperience (such as being involved in a car accident, dog fight, orliving in the aftermath of a death in the family, or the emotionaladdition of a new baby), serious injury or illness, or the infirmitiesof old age such as cataracts, loss of hearing and so on, can all triggerbehavioral issues including separation anxiety.

If you have an adult dog (or even an older pup) who is having problems like this, then check out this page... Separation Anxiety In Your Dog

But back topuppies, and in order to help your pup and keep his emotions on an evenkeel, it`s important that you be able to tell the difference betweennormal homesickness, loneliness, nervousness or boredom and true SA.

Thesection below will help you do just that.

Symptoms of Separation Anxiety in Puppies

How do you know if it`s SA that`s causing Fido to act this way, or if it`s just normal puppy behavior highlighted by stress of coming into his new home?

Dogs are pack animals, so they`re very social and in the wild they would spend their lives in groups (like wolves do), so they instinctively consider their family - canine or human - as their pack.

Puppies are baby dogs, and as babies they`re pretty much helpless and unable to take care of themselves, so their survival instincts mean that they are hard-wired to stay close to the rest of the pack - to make sure they stay alive.

Your new pup just lost the only family he`s ever known, and he`s a tiny baby, so he `latches on` to his new family and makes them his `pack`.

The person who is most involved with his care becomes his `momma` (even if he`s a man!) and he has a strong desire to stick close to her/his side at all times.

This is why your new family member seems to be under your feet at all times, and cries when you are out of sight. Ancient survival instincts tell him it`s not safe to be alone, and so he gets scared when he`s by himself. This is totally normal.

But of course, your pup now lives in the (relatively) safe human world, and he`s not going to be eaten by bears or shot by a hunter while you`re in the kitchen and he`s in the den. Unfortunately for both of you, he doesn`t know that!

Some whining, crying, barking or even howling when he`s crated or just left alone is to be expected.

He might scrabble at the door of his crate, or the baby-gate at the open doorway. Depending on his own individual personality he might only cry for a few minutes before wandering off to play with his toys, or curling up to take a nap in his crate.

Or, he might howl and bark for 30 minutes or more, stopping only to take a few breaths, or chew disconsolately on his bone for 10 seconds!

BUT he will stop after a while, and the worst of the behavior will be the noise... it wears you down and jangles your nerves.

It`s also normal for your pup to be afraid of certain things like loud noises, the vacuum cleaner or riding mower, thunderstorms, or raised voices at first.

If he`s not been socialized very much he probably also has some fear of strange people, places or other animals.

Luckily it`s pretty easy to recognize and help a puppy who`s averagely fearful , and a predictable routine, a safe environment, regular socialization and positive training can all help your little one grow in self-confidence and mature to be a happy, friendly adult dog.

Behavior of a puppy with separation anxiety 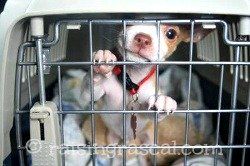 If your pup really is experiencing separation anxiety his behaviorwill be much more extreme and you should be able to tell that somethingis really wrong.

... instead he`ll probably bark rapidly and frantically, probablyinterspersed with whining and/or howling, pretty much for as long as hecan manage before he`s entirely exhausted... and that can be a l-o-n-gtime.

Your pup will be incapable of being still. He`s fueled by hysteria and will probably pace, run around, jump, spin or all of these.

He`ll also probably bite/tear at the interior of the crate, the doorway or walls, carpeting, flooring, toys, blankets... anything he can get his teeth into.

His constant panting is usually accompanied by drooling and yawning, all signs of stress in dogs.

The absolute panic will likely make him lose control of his bladder/bowels at some point and he might pee/poop several times - even if he`s just been for a potty break.

Diarrhea or loose stools are common.

Over time he might start to show compulsive behaviors. Some, such as spinning or tail-chasing are obvious, others such as compulsive licking (himself, the wall, you...) or chewing on his feet can go unnoticed for a while before you realize what`s happening.

If you think your pup really is suffering from SA, then there are things you can do to help him learn that the world is not coming to an end when you leave, and to improve his self-confidence and ability to relax when alone.

Treating his `issues` takes a lot of patience, effort, time and loving understanding and getting angry with your pup will only make him more upset and cause more trouble.

Preventing separation anxiety in the first place is actually the best way of dealing with the problem, and although this is more difficult with older dogs who may already have entrenched behavior issues, for all but the most neurotic of puppies it`s actually pretty straightforward. 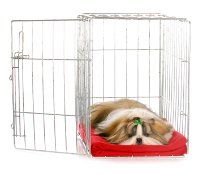 So, how can you prevent SA from taking hold in the first place if puppies are naturally anxious during those early days?

There are a few really simple ways to do this. They don`t take a lot of time, and are very effective in the long run, but they do go a little against our natural instincts to `coddle` an adorable little puppy who is glued to our side.

Even though it might tug on your heartstrings to follow this advice, it really is in the best interests of your pup in the long run, and will help him grow up to be a much calmer, happier and more confident dog - so just hold onto that thought!

Help prevent SA from rearing it`s head in the first place by.... 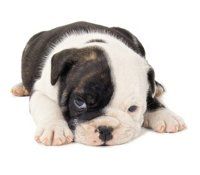 There is no one-size-fits-all `cure` for SA in puppies or dogs, but the younger your pup is the quicker and easier it is to find a way to help him overcome his fears and build up his shaky self-confidence.

Following the advice above helps because it`s designed to help him feel less frantic when you`re out of his sight and to de-sensitize him so that he`s not as reactive or emotional.

But there are also other things you can do for a pup who is hysterical or truly panicked when left alone.

My Dog Training For Separation Anxiety  page has lots and lots of information and advice on simple behavior modification techniques that you can use to calm things down.

Sometimes some soothing music or sounds can help calm our frayed nerves, and this often works for our dogs as well.

There are several different dog relaxation CD`s to choose from and these are a simple, and inexpensive tool worth trying.

Natural products can also help take the edge of extreme anxiety and help calm a pup enough to begin his path towards self-confidence and self-reliance.

which are good for all types of anxiety-inducing situations).

These use natural pheromones to keep Fido calm and relaxed, without any side effects and our family has used them to help puppies and dogs of all ages and sizes.

A diffuser is perfect for separation anxiety issues because you can plug it into a socket that is near Fido`s crate. The collars are wonderful for SA too, especially for large breed puppies and adult dogs.

They also help a dog to cope with other anxiety-producing situations such as travel/vacations, a house move, a new baby/pet in the home and so on.

They`re not an instant solution, and it can take up to two days for you to notice the difference, but some pups/dogs respond much faster.

I recently recommended one of these diffusers to a site visitor with a puppy who barked constantly when left alone, and she was thrilled with the result....

`I noticed it start working within eight hours. I have a completely different dog!`

There are different types of pheromone collars. Adaptil and Sentry are the two that we use in our family.

The Adaptil brand has a higher concentration of pheromones so I believe they`re more effective. However the Sentry brand has other calming scents (they actually smell great right out of the packet) and also seem to work well. The choice is yours :)

There are a host of different things you can use to help a puppy who`s stressed out and anxious.

Here are some that are worth checking out..... 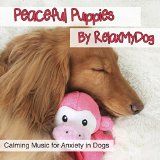 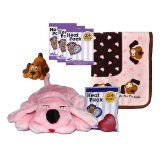 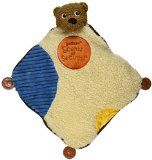 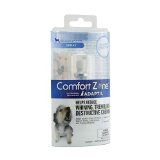 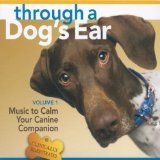 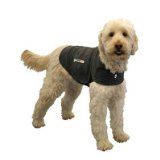 If you`re interested in taking a look at a further selection of natural products that can help with separation anxiety in dogs and puppies, try this page... Dog Separation Anxiety Medication.

I love to read and research, and always find that a good book is worth it`s weight in gold and there are several great books that can help you to understand your anxious/fearful or shy pup/dog.

Whether Fido is just mildly anxious, or devolves into full-fledged hysteria when you`re out of sight, there`s a book here which can help.....