Diarrhea in puppies is SO common that your new pup is likely going to have at least one episode of loose stools during his first few weeks with you.

Diarrhea can be caused by....

Although your little guy might get `the squirts` from something as simple as a sudden change in puppy food or getting into the trash can, it`s can also be the first sign of several serious illnesses.

Diarrhea in puppies should never be ignored - or even taken lightly, especially if there`s vomiting as well.

If you`re in any doubt, or worried, always get veterinary help/advice right away - it`s better to be safe than sorry.

Most Common Causes Of Diarrhea In Puppies

Here`s a closer look at what could be causing your puppy`s pooping `problems`...

Of course it`s natural to worry when your puppy`s poop doesn`t seemnormal, but although an occasional episode of mild puppy diarrhea isn`tunusual, it can be cause for concern.

The information below explains more about the different types of puppy diarrhea that you`re most likely to see, what each type could mean and what you should do. 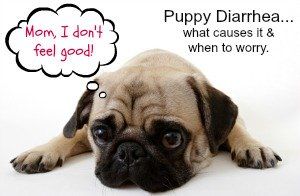 Diarrhea in puppies can range from a soft `pile` to a jet of water... and just about everything in between!

If your pup has a couple of soft, chocolate-pudding-type stools, don`t panic right away.

This sort of diarrhea usually doesn`t last for more than 24 hours and can be caused by a simple tummy upset.

Your little guy might perfectly normally, or he might seem a little quiet or look sorry for himself, but he shouldn`t look really ill, be inactive, or refuse a drink or a treat (even if he doesn`t want his dinner).

A Change In Diet
When you pick up your new puppy home, it`s a good idea to ask what type of puppy food he`s been eating up to this point.

Then make sure you stick with that for the first week or so because suddenly switching your puppy from one brand of food (or from dried to canned, commercial to home-made etc) is one of the most common causes of puppy diarrhea.

If you decide you want to change the brand of food your new pup is eating that`s fine, but make the transition slowly.

Stress
A puppy`s digestive systemcan be fairly delicate and is easily affected by stressful situations.Things such as leaving their mom and siblings, a visit to theveterinarian, getting used to a new home environment, excess excitementor exercise and so on, can trigger a bout of loose stools.

Stress can also allow a parasitic infection called Coccidiosisto take hold. These parasites exist in most pups/dogs, but are kept incheck by the immune system.

When a young puppy is stressed, his immunefunction is repressed and coccidia can flourish. If your puppy`sdiarrhea gets worse quickly, is watery or is tinged with blood/mucusthen coccidia or a viral/bacterial disease might be the problem.

Eating Something He Shouldn`t
Little puppies are endlessly curious, and often seem to believe thatEVERYTHING is edible, until proven otherwise!

If your pup hasbeensnacking on left;overs from the garbage can, the flowers or dirt in yourfrontyard, the cat`s food, newspaper, crayons, or some other `inedible`stuff, then he`s most likely going to have at the very least some loosestools, possibly some diarrhea and/or even vomiting.

Asurprising number of every-day foods and other items are toxic, ordangerous for your puppy to ingest. You can find a list of the ones mostlikely to cause trouble on my Poisonous Foods page.

If your pup has a mildly upset tummy and this type of diarrhea, a good probiotic can help `reset` his system. I`d recommend Nutramax Proviable Kit for Cats and Small Dogs

It not only rebalances his digestive system by encouraging the growth of `good bacteria` in Fido`s gut, but also helps to firm-up his stools.

Allergies
Dog food allergies
and sensitivities are more common than many owners realize, and these can cause diarrhea in puppies, and dogs. True allergies are more likely to cause skin irritation or inflammation and itching, whereas a `sensitivity` to an ingredient may cause loose stools or even vomiting.

High-protein puppy foods are also more likely to cause loose, unformed stools in some puppies.

If yourpuppy has repeated, watery diarrhea that contains blood and/or mucusit`s likely to be an emergency situation and you need to get him to avet right away!

Video: Diarrhea in Dogs-How to Stop it Fast Once and For All

If the diarrhea is liquid (anything from soupy to watery) then it is time to worry.

I`m not saying that you need to panic, but you definitely need to get your little one to your veterinarian as soon as you can.

These stools are are usually caused by one of two things.....

Parasitic Infection
Your puppy could have developed an infection caused by parasites, such as Coccidiosis or Giardia, both of which can cause pretty severe, foul smelling diarrhea (sometimes accompanied by vomiting, lethargy and loss of appetite).

A bad case of puppy worms (particularly roundworms, whipworms or hookworms) can also result in your pup suffering from diarrhea and/or vomiting.

You might also notice that his stools contain a lot of mucus becausethe worms cause a lot of internal irritation. This is most often seen invery young puppies who haven`t been dewormed yet, or older pups whohave never been treated for worms, or not treated often enough.

Disease Or Illnesses - Many Of Them Serious
Many of the most contagious, serious (and often potentially deadly) dog illnesses have diarrhea as one of the earliest symptoms.

Thiskind of diarrhea is usually very watery, and can contain mucous and/orblood (shows as red or brown). It`s usually frequent, and may spray or`jet` out with some force.

Dog diseases such as Distemper, Canine Parvovirus,Hepatitis and Corona Virus are just some of the possible reasons forthis type of puppy diarrhea and all of them need emergency treament.

AsI mentioned above (and can`t stress enough!), watery diarrhea that`shas streaks of blood or contains mucus is a red flag. Don`t`wait-and-see`, get veterinary help IMMEDIATELY. Your puppy`s life couldliterally depend on it.