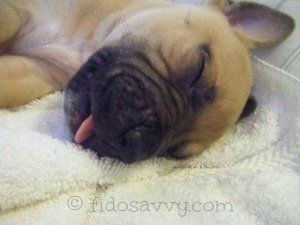 A young puppy breathing fast, or erratically, can sometimes make you worry.

It might seem as if he`s breathing way too quickly, or even that he`s holding his breath.

Video: You NEED to Know About These 5 Pet Emergencies (Breathing & Digestion)

When you combinethis with the normal twitching, wriggling and even whining or barkingthat a many puppies indulge in when they`re dreaming and it can be `panicstations` for the human members of the family.

I get many questions about this sort of situation, and the good news is that almost every time there`s nothing to worry about!

Let`s start with the way your puppy behaves when he`s deeply asleep.

Youngpuppies are basically tiny babies, and they`re either eating, playing,eliminating or sleeping... and sleeping takes up more time than anyother activity.

Sleep is very important to puppies as it`s whentheir little bodies do most of their growing and developing, so it`snatural that it will be one of their favorite pastimes.

Butpuppies don`t necessarily sleep in that `dead to the world` way thatsome mature and older dogs do.

They may twitch, jerk or `wriggle`, whineor even bark..... and their breathing may seem very fast, or slow andshallow, or appear to `stop-and-start` as if they`re holding theirbreath.

If you`re a mom or have spent much time around newbornhuman infants, you`ll know that it`s the same with them.

Erraticbreaths, twitching, grimacing, smiling, clenching their little hands...they do all of these things while they`re asleep.

This is all quite normal, and usually nothing to worry about.

Does my puppy breathing fast mean that he`s sick?

I`m not a veterinarian and there`s no way that I can tell you forsure that your puppy is 100% healthy, or whether or not he has anyproblems that are related to the way he`s breathing when he`s asleep....

BUT if he is happy, active, eating well, drinking well, is up todate on his vaccinations and parasite treatment and is showing no othersigns of illness, then chances are good that Fido`s just fine.

However, apuppy who has difficulty breathing when awake, or shows any other signsof illness is a different story.

Occasionally a puppy will be born with aheart or circulatory problem and this may cause his breathing to beextra fast, or shallow, as well as a number of other symptoms such astiring easily, failing to grow or put on weight at a normal rate.

If your puppy is breathing quickly, or erratically, when AWAKE, and has any of these symptoms, get him examined by a veterinarian right away:

Ifyou`re a little worried about your puppy but he doesn`t seem really ill,isn`t injured or needing immediate veterinary attention, you can getanswers to your puppy health question (about a puppy who you think has breathing problems oranything else!) by asking an online veterinarian.

It`s a quick way to get peace of mind and is much more affordable than a vet visit that you`re not certain you need yet!

BUT... if your puppy is showing signs of illness such as vomiting,diarrhea, extreme lethargy, weakness, disorientation or any otherserious symptoms, get him to your own vet immediately!