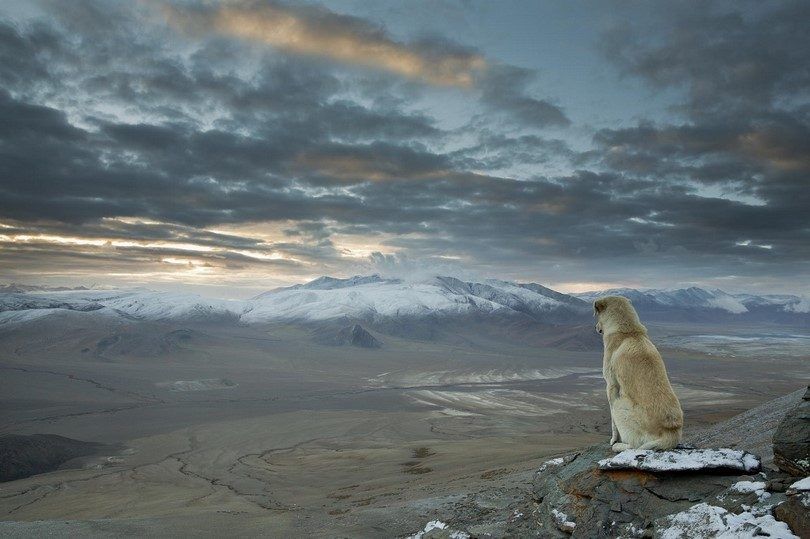 Occasionally, you’ve heard of people walking in their sleep, but rarely have you heard of animals displaying such behavior. A funny thing has been happening to Frisky, Julie’s pet Labrador. More frequently these days as the dog snoozes in its favorite corner, he starts twitching, and moving his legs rapidly in a manner as if running.Eventually the dog would jump to its feet and start move around in circles. 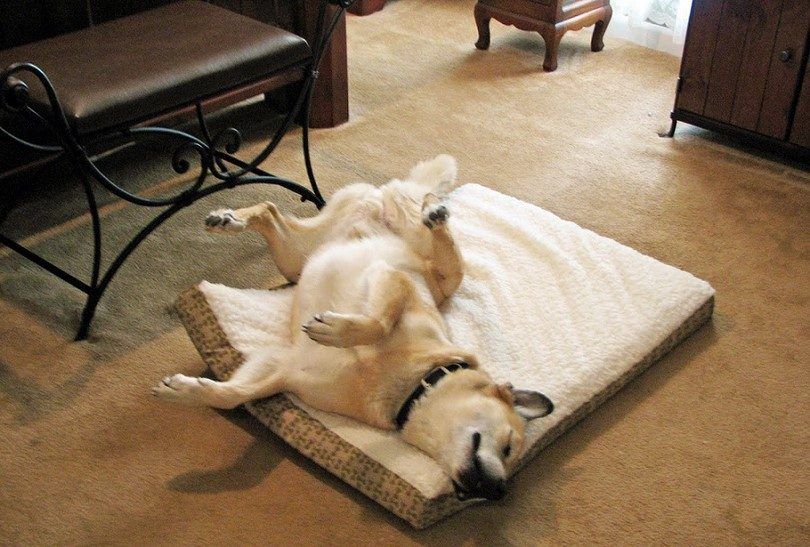 Julie would try to talk to him in her usual way to give him some reassurance, but he does not seem to hear her. Is Frisky in a dream or is he a sleep walking dog?Sleep walking behaviorSleep walking is often the subject of funny recollections and great hilarity relating to humans. You probably know of a friend, a brother, or someone of other relations who raided the refrigerator and ate the entire apple pie but does not have a clue what you’re talking about when confronted. But the pictures finally tell the tales as you caught the culprit red-handed. He cannot be held responsible however, because he did it in his sleep.Very rarely does one hear of animals displaying unusual behaviors that you would classify as sleep walking otherwise called somnambulism. Somnambulism is really a sleep behavior that occurs during deep sleep that involves movement such as walking and engaging in other activities that would only happen when awake.You see, during sleep the brain causes both the conscious mind and the physical body to shut down and be at rest. The muscles become relaxed and movement is suspended for a while. However, for some people this function becomes sort of twisted and sleep walking takes place. 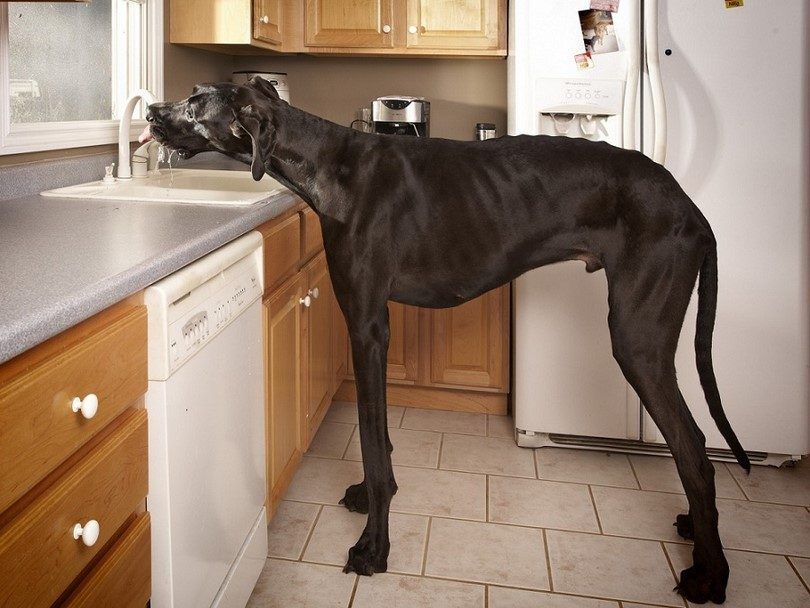 The behavior tends to occur more in children than adults especially when persons are deprived of sleep. You may have heard tales of persons moving to another area in the house and carrying out activities that are not normal. Some activities can go close to normal such as eating a bag of chips.However, some persons have climbed out of windows and landed up hard two stories below or have found themselves in places that are rather unsafe. Then there is that incident of urinating in the shoes. It is quite difficult to arouse a sleep walker and usually he has no memory of the activity (National Sleep Foundation, 2015).Dog sleepwalkingHave you heard of a dog running in sleep? If you were one of those persons who keeps up with the technology, you would have seen the video of Bizkit the dog that sleepwalks. This video went viral when it was uploaded and many viewers have found it quite a funny affair. In the video, Bizkit lies down to take his usual nap.However, minutes into his sleep the dog’s body starts to jerk and then it starts to flay his feet as if he is running.  This goes on for seconds or a few minutes but the action gets more intense until it seems that the dog is overwhelmed by his seeming “activity”, he jumps to his feet and runs right into a wall. The dog runs into the wall as it seemingly tries to continue the activity in his sleep. It is only when it hits the wall that it wakes up and stands there as if asking “What just happened a while ago?”Dreaming in AnimalsOne of the things that must be done for sure is to determine what took place. Many pet owners will tell of their experience with their dog that seemed to be dreaming as it sleeps. Watching the animal, it would growl, whimper, twitch, and move its feet as if running. The dog would also inhale and exhale rapidly, panting as if in a chase. What do you do, do you try to wake the animal? According to Meggit (2014), it’s better to “Let sleeping dogs lie”’ as there is a chance that it may attack you when aroused. 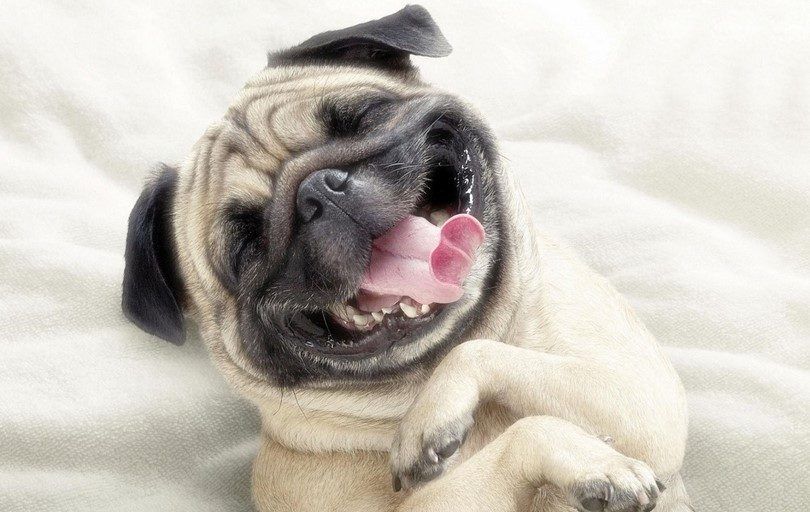 Was that sleepwalking behavior, a simple dream or a seizure? The jury has been out for this as many people question whether animals dream or sleepwalk. The non-expert view is that animals such as dogs do dream as humans. Dream occurs in the rapid eye movement (REM) stage of sleep and dogs do display the behaviors.The brain is very active at this stage and the images in dreams would have been acted out had it not been for certain chemicals that control the body. It is suggested that if those inhibitions were to be removed from cats for example, they would have moved around the room in their sleep, trying to chase the mice that find their way in their space (Hill, 2010).According to Texas A & M College of Veterinary Medicine, there is no surety that animals on a whole do dream although they display all the signs as humans. Dr. M. A Crist, Clinical Professor at the University indicates that this behavior of the dog in the video could be a sign of a sleep disorder (Sleeping Disorders in Animals, 2009). 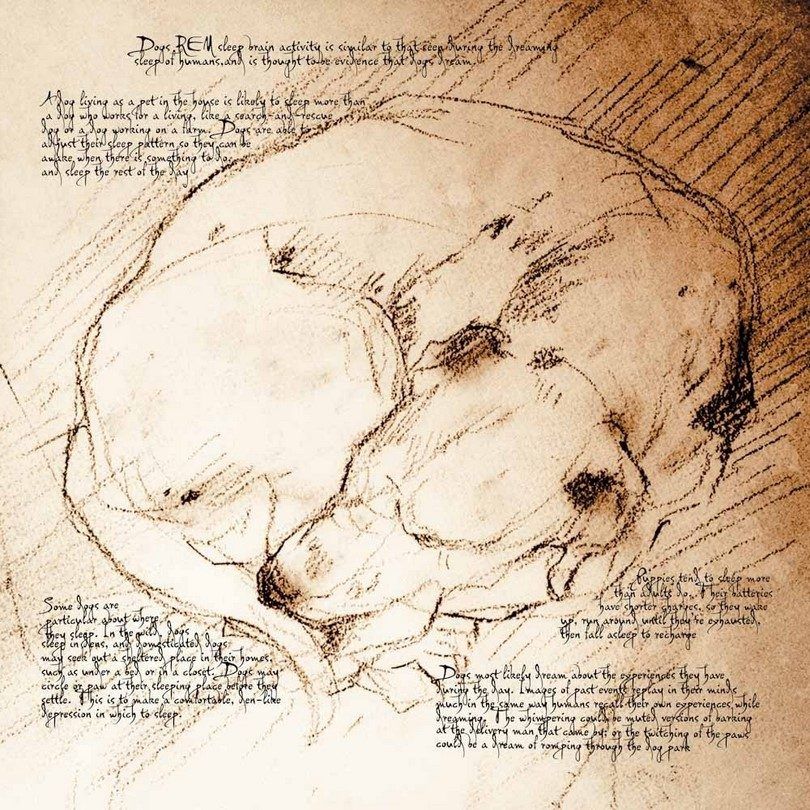 He observes however, that dogs do have REM sleep and display certain identifiable signs such as leg and tail movements, facial twitching, and vocalization (barking and growling). This could very well be a signal that they are dreaming.Sleep disordersHere is another scenario where a pet owner describes how her Labrador gets up in the nights and sniffs around the family’s shoes and crawls in and out from under the kitchen table as if in a trance. The dog does not recognize when the light is turned on or that someone comes into the room. He only returns to bed after some gentle coaxing and is back to normal in the morning. This is a mysterious case also where the owner is now wondering if the dog is actually sleepwalking. 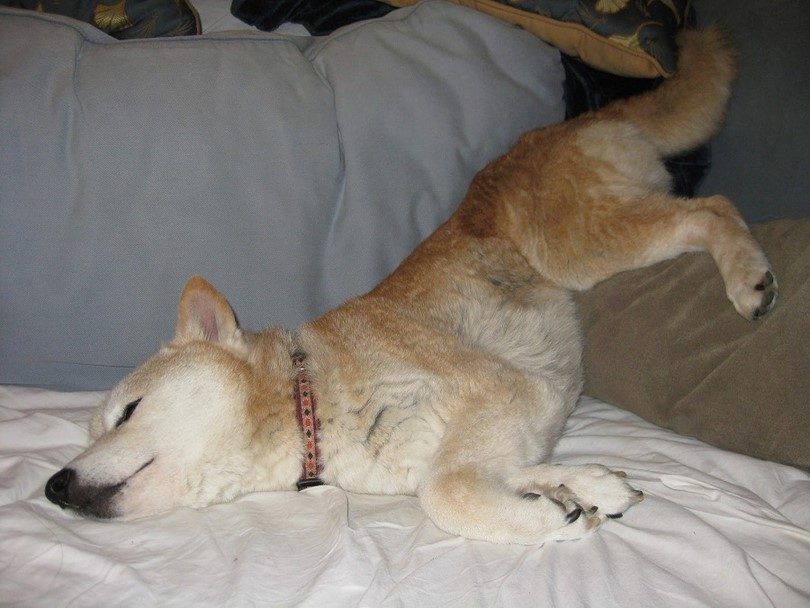 Wedderburn (2014) advises that it is not a case of sleep walking as dogs do not ramble around as humans do in their sleep. Dogs are more likely to paddle their feet as if running, and engage in jerky movements of the body. The Labrador’s problem instead resembled a cognitive or mental disorder that is often associated with aging.Senility for example is an infirmity of old age and when it is setting in, a dog can move around aimlessly without any obvious indication of purpose. Narcolepsy and cataplexy are two other disorders that can affect dog sleep.  Wondra (2013) does not call the behavior sleepwalking. Instead, she offers what is described as REM behavior and periodic limb movement disorder. Of such, it is necessary that the dog have a neurological examination done by a vet to determine any mental issues.Seizures in dogsCould a seizure be mistaken for sleepwalking? Scotty the pooch is quite an exuberant little dog, but these last few times he moves about in a confused state with an unsteady gait. He would fall to the floor and appears unconscious and paddles his feet as if in water while his body twitches uncontrollably. These are the signs of a dog having a seizure or epilepsy and yet some could be those of a sleepwalker.Seizures are a result of complex chemical reactions in the brain that sets off a firestorm of electrical activities, causing uncontrollable abnormal behaviors in the animal. There is therefore nothing to say that the dog in the video was not having a seizure. Many symptoms of seizure may be mistaken for sleepwalking. In the case of a seizure, apart from paddling his feet a dog may slump on the floor, become dazed and disoriented, drool and twitch, move around in circles and bump into objects.Need for neurological testWhether your dog is a victim of sleepwalking, dreaming or seizure, you may not know for sure. A dog cannot tell what is happening to them. It may be time therefore to talk to your vet. Seizures will definitely need anti-seizure drugs. However, where there is doubt as to the actual behavior of the dog, the vet may seek to rule out each problem by prescribing drugs.If it is a case of sleepwalking or dreaming, anti-seizure drugs will not have an effect. One thing is certain is that where a seizure is detected, the dog must be treated right away. In a seizure it is said that the body temperature can rise so high that it can damage the organs. 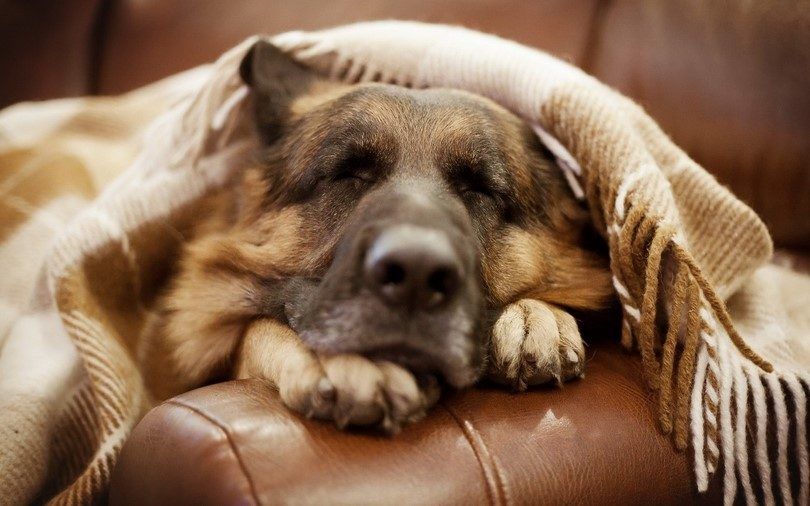 Veterinarians will suggest that a neurological examination is done of a dog that displays sleep behaviors. Neurological tests are used to determine if the animal has a disease in his nervous system and if so, the likely location in the brain. Neurological tests do not tell the disease that the animal has, but rather the location of the problem. The dog will be checked for its mental state. Where there is evidence that the animal is not behaving normal, being in a stupor, semi-consciousness or disorientation, means that there is a problem in the frontal lobe of the brain.The doctor will also look at the animal’s gait and posture which could indicate weakness in the muscles and incoordination. This test could also root out orthopedic diseases such as arthritis. The nerves in the cranium that run to different parts of the brain will also be tested, and this will lead to any neurological disease that may exist in these areas. Additionally, the neurologist will test the positions of the limbs and also the reflexes.Animal safetySomething must be said about the safety of the animal that is experiencing unusual sleep behaviors. People who are in the position of observing sleepwalking in another human or in animals do find it quite amusing as they only see the funny actions that occur. While there will be concern for the human species walking over a ledge, stepping through a six-storey window, or falling into a pond, sentiments may not be as high for a canine although he is considered a man’s best friend.A dog that sleepwalks or has a seizure is at risk of injuring himself at any time. The dog in the video clearly could have injured itself as it jumps up and slams into the wall. How many times does a dog sleepwalk and gets a body slam like that? What other danger do they face, drowning, burning, or falling?Dogs with displays of abnormal activities such as sleepwalking should get immediate attention from a vet. The fact is that we are not sure what the problem is which could be more serious than occurs on the surface. In the meantime it is suggested that you do a review of your pet’s diet as certain foods are known to help with sleep disorders in animals.A diet that is enriched with Omega 3 fatty acids and foods high in antioxidants are known to be good for dogs and will help with their cognitive and sleep issues. Studies have shown that dogs who have foods supplemented with beta-carotene, mixed tocopherols, flavonoids and carotenoids and omega 3 fatty acids experience greater improvements in their cognitive performance. 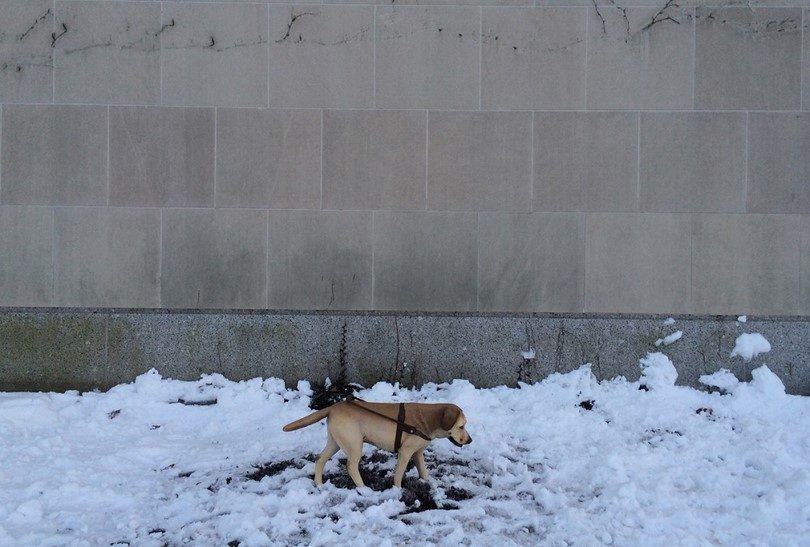 Many pet owners have observed their dogs engaging in activities that leave them to wonder if their pets are sleepwalking. The twitching body and paddling feet are just few of the signs that dogs exhibit. But then experts have pointed to the fact that there are other issues with the same displays. REM sleep, narcolepsy and cataplexy are some sleep disorders that do get in the way of animals.However, seizures or epilepsy are also culprits that affect dogs in the same way. Chilling scenes of a dog’s behavior supposedly sleepwalking may be a thing of amusement, but the reality is that it can be a sign of something greater, and may present a clear danger to the animal. Pet owners should take steps to have their dogs examined.