Breed-specific bans are beginning to pop up in cities all across the country. Last month, disabled ex-Chicago cop, James Sak, moved to Iowa to be closer to his wife’s family. Little did he know, there is a breed-specific ban in Aurelia, Iowa, and he would be forced to give up his best friend and service dog, “Snickers”.  Lisa Balde of NBC Chicago gives us the story, a pit bull ban separates a disabled man and his service dog. 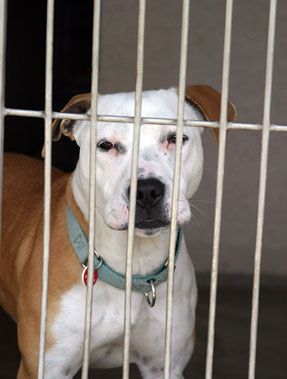 Earlier this month, James Sak, 65, had to relinquish his service dog, a pit bull mix named Snickers, because of a pit bull ban in Aurelia, Iowa. After a city council vote, Sak was asked on Dec. 14 to remove the dog from town, and Snickers was sent to a boarding facility outside Aurelia.

“I lost my helper,” said Sak in a note to media this week. “I’m not looking for special treatment, I just want to be safe, and I need my service dog for that.”

Sak suffered a stroke in 2008 that left him confined to a wheelchair and unable to use the right side of his body. He was paired at the University of Illinois Medical Center in Chicago with Snickers, who helps him walk, balance and call from help in an emergency, he said.

Sak’s wife, Peggy Leifer, said she can’t leave him alone now. The couple is perusing legal action against the city of Aurelia under the Americans with Disabilities Act and with the help of the Animal Farm Foundation, which aims for equal treatment for “pit bull” dogs.

They filed a motion for injunction, and a hearing is scheduled for Wednesday in Sioux City.

“The loss of service dog Snickers squarely impacts Mr. Sak’s ability to undertake daily functions,” the motion reads. “Mr. Sak has already fallen once since the loss of Snickers and required emergency assistance from law enforcement.”