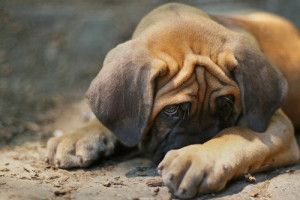 Breed Discrimination is a very touchy subject among dog enthusiasts. Everyone has very strong opinions concerning one of the most heavily discriminated breeds, the “pit bull”. There are tests are available on the internet, flip through the photographs and find the pit bull. Most people choose the wrong breed (Myself included). The term pit bull refers to several breeds of dogs including the American Staffordshire Terrier, the English Staffordshire Terrier, the American Pit Bull Terrier, the English Bull Terrier, and even some bulldogs get lumped into the pit mystique. Throughout the text the term “pit bull” will define any and all of the above mentioned breeds.

At the turn of the twentieth century, the American Pit Bull was the number one family dog in America. They appeared on patriotic posters during WWI as the epitome of loyalty and honor. When German Shepherds were starting to making their way to American shores, they were looked upon as vicious dogs that were unstable and untrustworthy. Once the German Shepherds were found to be excellent family dogs as well as police dogs, the Doberman Pinscher was well on its way to becoming the most aggressive breed to be feared. On the height of Doberman’s discrimination, Rottweiler’s were rapidly ascending the list of ferocious instability. Although the stigma still lingers in some dog lovers minds concerning the Doberman and the Rottweiler, it is now the “pit bull” that has gotten the brunt of fear and anger.

While searching the internet for unbiased statistics concerning biting by breeds, the results that continuously popped up were fatal dog attack reports by “pit bulls”. Over a ten year period there have been thirty-six fatal dog attacks against humans. Twenty of those attacks have been reported to be by “pit bull” dogs. There have been two “pit bull” dogs a year that have killed humans. Impartial data from the CDC showed that the Golden Retriever held the number one spot for biting in the United States. The American Pit Bull was listed as number four.

Some animal rights movements have launched legislation banning specific breeds from residing within city limits. Not only does it cover house pets, but service animals as well. Several rental agencies and landlords forbid certain breeds from residing on their properties. Insurance companies won’t offer rental or homeowner coverage if certain dog breeds live in the dwelling.

Get involved with a rescue that deals with a discriminated breed. Attend events to get the word out. There are several national campaigns to end the discrimination. Best Friends Animal Society has the “Saving America’s Dog” Campaign. The ASPCA has several ways to get involved including educating the public on alternatives to Breed Specific Laws (BSL). Knowledge is power. Become informed and share it whenever possible.

Video: Stop Animal Cruelty,End BSL.Ban The Deed Not The Breed.