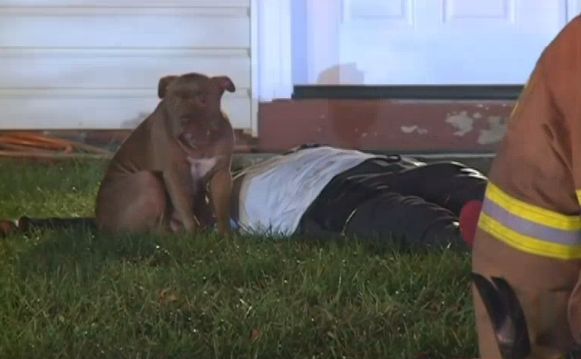 A pit bull won the hearts of animal lovers around the country when photos of the loyal dog showed her refusing to leave her injured owner’s side after fire broke out in the home.

While her family who were injured in the fire are all expected to be OK, Princess’ fate remains unknown, simply because of her breed.

Breed specific legislation in Prince George’s County means that it’s illegal for Princess and her young puppy, Molly, to live with the family that she so clearly loves and is devoted to.

After the fire, Princess and Molly were removed from the home and taken to the Prince George’s County Animal Shelter where they are being held until either a family member or a rescue organization outside of the county can take them. They will not be returned to the family as long as they remain living in Prince George’s County.

Animal Control has announced that they will not euthanize the pair, but they cannot return to their family.

Despite overwhelming evidence that shows Breed Specific Legislation is ineffective at reducing or eliminating dog attacks, many counties around the nation keep these bans in place.

As a result, loyal and loving dogs like Princess and her puppy are removed from their homes and sentenced to life without the family they’re devoted to.