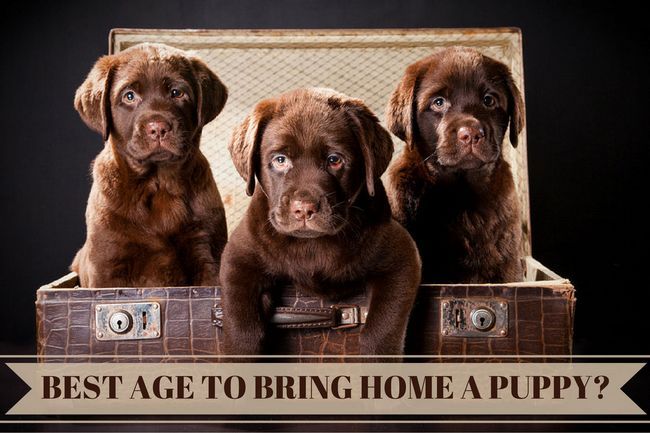 Instead of asking ‘what’s the best age to bring a Labrador puppy home?’, the more important questions are:

‘When is it OK to remove a puppy from its mother and litter-mates?’

‘What are the consequences of removing it too young?’

I’ll cut straight to the chase and say you shouldn’t bring your puppy home until it’s at least 7 weeks old, with the recommended age universally agreed to be 8 weeks of age.

But why is this?

Problems With Taking A Puppy Away From Their Mother Too Early

Removing a puppy from its mother and litter mates too early causes a range of problems in the puppies development.

Many studies performed have shown a resulting increase in aggression, over-reactivity, learning problems, fearfulness and anxiety in puppies removed too early.

One such study is discussed on ‘HealthyPets.Mercola.com’ in the article: Puppies Taken from Litter Too Soon Develop Behavior Problems as Adults.

When you consider what a puppy learns from its litter-mates and mother within those first few vital weeks, it’s easy to understand why.

What Does A Puppy Learn From Their Mother And Litter-Mates – And The Consequences Of Missing Out.

A puppy learns a lot of things by remaining in the nest that it simply cannot learn when it’s taken away too soon:

They Learn To Accept Discipline

A mother will regularly discipline a puppy for bad behavior during its first few weeks of life. The puppy may throw a tantrum and feel hard done by, but the mother will be stern…although they always follow the discipline with a little nuzzling and some love :-)

This early and regular dishing out of discipline teaches the puppy about right and wrong, that actions have consequences and bad behavior is punished.

If this learning is taken away, the puppy may develop behavioral issues and not accept direction and commands from its owner later in life. This can making training harder and ultimately lead to a less controllable dog.

They Learn Bite Inhibition And Having A ‘Soft Mouth’

A puppy will learn from its mother and fellow puppies about the strength of its bite and not biting too hard .

It’s litter-mates will yelp with pain and move away, and the mother will snarl and discipline the puppy if it bites and hurts while suckling. Also, the puppy will itself be the victim of too hard biting, so it gets some first hand experience of how painful it can be.

This teaches the puppy that biting too hard hurts and results in bad consequences, so they slowly learn to control their bite. This is known as ‘bite inhibition’ and is a vital skill for any dog to learn.

If taken away before these lessons are learnt, the puppy will bite too hard not knowing any better and this can be very dangerous as the puppy matures into a larger and stronger dog. You would have to go through the process of teaching bite inhibition yourself and this can be difficult and even painful work!

They Learn What It Means To Be A Dog

During time with its litter-mates and mother, a puppy will learn how to relate to and communicate with other dogs.

By removing a puppy too soon, it will miss out on this vital education, will be under-socialized to other dogs and this can easily result in the puppy being fearful of other dogs or just plain not liking other dogs later in life.

This will mean less time in dog parks and playing off leash because it can’t ‘get along’ which will lessen the overall quality of your Labradors life.

They Learn Tolerance To Touch

A dog needs to be tolerant to touch for health and hygiene reasons and the safety of those around it. 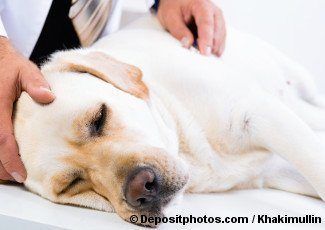 You’ll want to regularly groom and inspect your dog to check for parasites and other problems. And a vet will need to touch a dog all over during a medical examination. So you really need your Labrador to be tolerant of humans touching it all over.

A puppy will constantly be bumped, nudged, pawed and climbed all over during its time spent with its litter-mates. This teaches the puppy not to be afraid of touch, to get used to it and be more tolerant.

But if a puppy is taken too young it misses out on all this touch and could grow up disliking touch in certain areas of its body. This can result in behavioral issues and even aggression when being touched which for obvious reasons is very undesirable.

Is There An Age Considered Too Old To Bring A Labrador Puppy Home?

Yes there is, but provided the puppy is socialized well while growing, it’s not as harmful as taking one too young. It’s the socialization that’s key.

The things a puppy is socialized to during its first 12 weeks have a profound effect on its level of confidence and levels of fear later in its life.

From about 7 weeks onwards, the puppy is very inquisitive and its willingness to approach unknown things and people is at its peak. This period declines at about 12 weeks of age and almost completely ends at 14 weeks where fear begins to creep in as a natural trait essential to survival if it lived in the wild.

So it’s essential that a puppy is socialized to as many things as possible during the 7 to 12 week period, and 14 weeks at the latest.

You could almost say, the things you don’t want your Labrador to fear, he won’t if exposed to them in a positive way within this critical period.

This is also the time when a Labrador puppy will form their strongest bonds with the humans they spends their time with. So it’s within your best interests to have your Lab puppy during this time and expose it to your children, grandparents, friends and other family so the bond it feels with you and your circle is as strong as can be.

A lack of decent socialization can result in the puppy being fearful of things, places and of human contact. A good breeder will have started this process before a puppy comes to you, but it’s the people with which the puppy will spend it’s life should do most of the socialization for the best results. This will put the puppy at greatest ease with the people and places where it will spend its future life.

(NOTE: This isn’t the only time socialization can be successful, it should be continued throughout life, it’s just the most important time.)

8 weeks old is the ideal time to bring your puppy home, during the previous week at a push, but certainly no earlier.

You may wish to bring your puppy home earlier than 8 weeks, but for all the reasons above, you should avoid this entirely. Your Labrador puppy’s development will be stunted, there’s a higher chance they will develop behavior problems and you’ll have to work so much harder to socialize and train your puppy to become a well-rounded, confident and happy dog if you do.

If a breeder tries to convince you to take the puppy home before 8 weeks, it’s usually for selfish reasons such as financial savings and not wishing to invest time into care and socialization. So be very suspicious of the breeder if this is their wish.

A good breeder won’t ever consider letting their puppy go before 7 weeks of age, and will be adamant the 8 week threshold is reached, especially if they feel you’re an inexperienced owner. This is so they themselves can provide a further week of socialization during this critical time and for the puppy to spend more time with their mother and littermates.

So for the benefit of you and your Labrador, leave them with their mother and litter-mates until 8 weeks of age.

And when you’re ready to pick up your puppy, be sure to check out our article on ‘Bringing Home A New Puppy‘ to make it as easy and stress free as possible and to give your puppy the very best start possible.

An Important Disclaimer – Older Dogs Can Still Sometimes Be Best!

If a dog’s been socialized properly, seen many places, met and played with many people and other dogs, experienced many things, been house-trained, crate-trained, all during the right times in its puppy-hood, then it’s perfectly safe and fine to take on an older dog.

Adopted older dogs can be some of the most amazing pets and just because the article above says 8 weeks is best, and socializing a puppy yourself is best, this doesn’t mean taking on an older dog is bad or anything to worry about, (as long as it’s been properly assessed for behavior and temperament.)

For busy families who don’t wish to go through the training process (especially house training), taking on a pre-trained and socialized mature dog can be the best solution. Most dogs will happily bond with and love a new family if given the chance and can be valuable and loving companions.

All content on this site is provided for informational and entertainment purposes only. It is not intended to be nor can it be considered actionable professional advice. It must not be used as an alternative for seeking professional advice from a veterinarian or other certified professional.

LabradorTrainingHQ.com assumes no responsibility or liability for the use or misuse of what’s written on this site. Please consult a professional before taking any course of action with any medical, health or behavioral related issue.