Distemper in dogs is a viral disease which is extremely contagious, very serious, and is often fatal.

The Canine Distemper Virus is the Paramyxovirus which affects your dogs` respiratory system first, then spreads to his gastro-intestinal system and eventually to his central nervous system.

The name of this disease is derived from some of the neurological symptoms it causes which include behavioral changes.

These can make the infected dog seem out of sorts, unpredictable or bad tempered, hence `dis-temper`.

Use these quick links to jump straight to the info. you need:

or simply scroll down to learn everything you need to know about Distemper in dogs.

About The Canine Distemper Virus

The virus spreads and transmits very easily, and can survive in the environment for long periods of time, this makes it a very hardy, and dangerous virus putting all unvaccinated puppies and dogs at risk.

The Canine Distemper vaccine is one of the CORE vaccines recommended by the American Animal Hospital Association for ALL puppies/dogs).

Early vaccinations plus annual boosters is the best (and only) way to fully protect your pet.

The good news is that with a proper vaccination protocol, Distemper in dogs is almost 100% preventable.

So getting his puppy shots (or adult shots/boosters) can protect Fido from a disease which is estimated to have an overall mortality rate of around 75% in unvaccinated pups/dogs.

As with most viruses, young puppies, older dogs and those with weakened immune systems are most at risk of death if infected, but even healthy adult dogs are going to be dangerously ill if they get Distemper.

Transmission of Distemper in Dogs

Distemper is highly contagious as it mainly spreads through the air (from coughing, sneezing, saliva etc.). 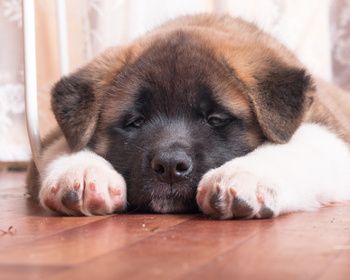 It can be transmitted through urine or feces of infected dogs too.

Dogs who have survived a bout of this illness are contagious for several months after recovery as the virus can continue to be shed from their body for as long as 3 to 6 months.

In environments where there are many dogs, such as boarding kennels, city pounds and large-scale breeding operations, it can affect many dogs in a very short space of time.

Although it`s called `Canine` Distemper, this virus can be caught, and transmitted by other animals including raccoons, foxes, coyotes, skunks and ferrets.

As with many other viruses, some animals who are infected won`t show any symptoms (ie they`re `asymptomatic`) but they will still be contagious and are known as `carriers` of the disease.

If a pregnant dog contracts Distemper, she can transmit it to her puppies in the womb.

The symptoms of Canine Distemper vary depending on how far the disease has progressed.

The incubation period can be anywhere between one and three weeks.

Sometimes the earliest symptoms show up within a week, other times it can take 10 - 18 days before a pup/dog appears to be sick.

Initial signs of Distemper include...

Coughing, sneezing, discharge from the eyes and nose.

Most puppies/dogs will be running a fever (anything over 103F is considered a fever in dogs).

The next stage of Canine Distemper is when the virus spreads to the digestive system.

This is when diarrhea and vomiting are added to the respiratory symptoms.

When I was growing up in the UK I always heard Canine Distemper referred to as `Hard Pad Disease`.

This is because one of the very distinctive symptoms of this virus is a thickening of the skin on an infected puppy/dog`s foot pads and/or nose.

The skin on your dog`s paw pads or his nose becomes thick and hard, crusted or pale. Sometimes it splits or bleeds.

The final symptoms are neurological and can occur weeks, or months, after infection.

These can include muscle spasms, twitching, lack of co-ordination, excess salivation, paralysis, behavioral changes and even seizures.

Once the virus has reached this stage it is likely to be fatal. However some dogs do survive even then, although they may have permanent side-effects.

Sometimes a puppy or dog will run a fever, seem lethargic or lose their appetite within the first week of being exposed to the Canine Distemper virus.

They may then seem to recover, only to start showing the respiratory symptoms a week or so later.

Diagnosis isn`t as straightforward as it is with some diseases, and your vet will usually use several different methods/tests.

Blood tests aren`t definitive, but they can help determine whether certain changes are going on in your dog`s body which could point to Distemper.

A skin biopsy can be taken and tested for antigens specific to this virus (signs that the body is reacting to the virus and attempting to produce antibodies).

But the results of a skin biopsy can take days and your vet is likely to prefer not to wait for them and opt to start treatment right away to be safe.

Examining eye discharge under a microscope can show the presence of the Paramyxovirus, as can an exam of the cerebrospinal fluid.

BUT none of these tests are totally reliable and false-negative results are fairly common.

So, your veterinarian is likely to rely more on the symptoms Fido is exhibiting, his overall health, vaccination history and so on.

If Canine Distemper is even a remote possibility treatment will be started right away.

Because Canine Distemper is caused by a virus, there is no `cure` for it.

However, that doesn`t mean that treatment isn`t available or that it`s not important.

In fact, quick diagnosis and supportive care are vital if you want Fido to have the best possible chance of survival.

Because the earliest symptoms are similar to an upper respiratory tract infection or Kennel Cough, they are sometimes not acted on quickly enough.

It can be easy to dismiss a cough, sneeze or runny nose but please, never do that!

If your puppy or unvaccinated dog is showing these symptoms or has any discharge from his nose/eyes, then he needs to be seen by a veterinarian immediately.

Of course it`s possible that he has a simple URT infection (but even those can turn to pneumonia fairly quickly if not treated) or Kennel Cough, but only a veterinarian can make an accurate diagnosis.

Supportive care is given to help your dogs` body fight off the infection.

This includes rest, often IV fluids and electrolytes and antibiotics.

The antibiotics don`t fight the virus, but they help to prevent or treat secondary infections which are common because of the way the virus weakens the body.

After that it`s really all dependent upon an individual dogs` overall health and strength.

How To Prevent Distemper in Dogs

Preventing your precious dog from catching Canine Distemper is as simple as making sure he is vaccinated against it!

Distemper is one of the CORE vaccines (the ones that the AAHA recommends all puppies should have) and is also part of the most common combination vaccines given to puppies.

Annual boosters can keep your dogs protection up to date.

This is the ONLY way to be sure that you keep your pooch from catching this horrible, and dangerous, disease.