The Black Russian Terrier, also known as the Black Terrier or simply Chornyi, is a breed of medium-sized, robust dog that originated in Russia. It belongs to the working breed family which is notable for their excellence in carrying out jobs such as guarding property, sled-pulling, and or water-rescuing. Black Russian Terriers, have been bred to guard, protect, and become police or military dogs. Their waterproof coat comes in black color with some scattering of gray hairs.

The male members of the Black Russian Terrier breed normally stand a height of 25 to 29 in at the withers, while bitches commonly have a height of 25 to 28 in. Their common weight is between 80 to 143 lbs. Male dogs are much larger and more massive as compared to the bitches. 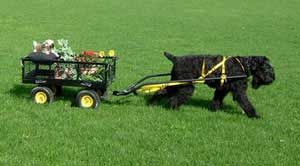 Black Terriers, in general, are brave, highly observant, and very protective dogs. They are known for their strong and well-balanced temperament. Puppies tend to become sensitive, adaptive, and playful. They are also inquisitive, intelligent, and have the propensity to get into almost anything. Even at maturity, the breed is enthusiastic towards children, and loves to play with them. Black Terriers crave for human and animal companionship. They usually keep away from fighting with other canines, though cannot tolerate around other large dominant dogs. The breed relates well with small animals such as cars and rabbits. Black Terriers enjoy being trained as they love to please their owner. They bark only when necessary, though may respond readily as the breed is always prepared to protect the house and the family. Adequate mental and physical stimulation as well as proper leadership are very necessary to keep these working dogs stable-minded.

Black Terriers generally require weekly brushing. Handlers are expected to get rid of the pet’s hair from its ear canals, and then trim the hair around its paws. The breed tends to shed very little.

Health Concerns
Some of the common health issues associated with the Black Russian Terriers include ear infections, progressive retinal atrophy, as well as elbow and hip dysplasia. They, nonetheless, have an average life span of 10 to 14 years.

Black Terriers typically can adjust to apartment living. They are relatively active indoors, and can be easily made happy if given a lot of attention and human companionship. The breed is likely to enjoy a yard so long as their master can interact with them outside. Taking them out for daily long walks can make them happy. Allowing them to romp and play will also be great. Black Terriers love to splash in the water and roll in the snow.