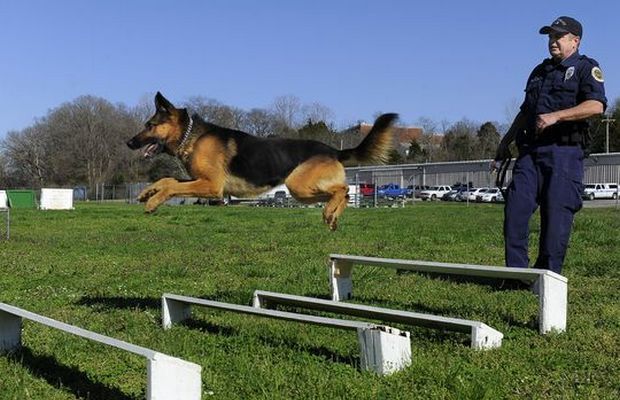 Terry Burnett, a 29-year veteran police officer, remembers the day in 1998 that he responded to the call of a bank robbery in progress. He responded with his 2-year-old German shepherd, Aron. Although Burnett repeatedly called the dog back, Aron was trained to run toward the gunshots, and unfortunately did not survive the incident.

Now, Burnett is thankful that the sacrifice of his canine partner has the chance to live on if the state legislature decides to pass “Aron’s Law.” If passed, the bill would set felony penalty charges for intentionally killing search-and-rescue, police, or fire animal.

Burnett says that on May 14, 1998 many officers’ lives were saved, including his own, when Aron distracted a robber at the Regions Bank branch. Hours after the robbery, the suspect was shot and killed by SWAT team members, and sadly, Aron passed away later that day at a local animal hospital.

K-9 Officer Brett Spivy is the driving force behind the legislation, and he has said that this law is crucial because K-9 officers ask their dogs to move towards danger on a regular basis. These dogs are trained to fight against dangerous criminals and help detect threats. They don’t run from peril, they run to it- making their job one of the most dangerous animal jobs on the planet.

Spivy also reminded legislatures that officers and their K-9s go through extensive training together and form a bond that is unlike any other human-dog relationship. They put their lives on the line for each other constantly, and that forms a stronger bond than many people can imagine.

Currently, the law only protects police dogs and horses and it is assessed as a theft. This means that criminals could get off with a misdemeanor for killing a K-9 officer. Aron’s Law would change this and make it a minimum penalty of a class E felony.

State representative Jeremy Durham (R) agreed to sponsor the bill because he believes that the key law enforcement function that these animals serve and the taxpayer investment in their training deserve a felony consequence. These animals value to the community is worth much more than a misdemeanor charge. He is optimistic that the vote will pass.