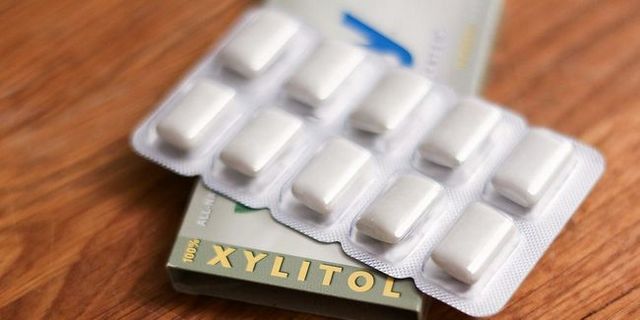 According to Dr. Ahna Brutlag, senior veterinary toxicologist at the Pet Poison Helpline, chewing gum has caused a surge in poisonings for dogs.

When a dog consumes xylitol, their bodies release a deluge of insulin, which can cause a range of serious health problems, including seizures, liver failure, and brain damage.

Of course, xylitol is perfectly safe for humans. But for dogs, it can be fatal. Ever heard that milk chocolate is toxic for dogs? Well, that’s true, and xylitol is nearly 100 times as toxic as milk chocolate. So consuming even a small amount of the artificial sweetener can be disastrous.

Take, for example, the story of Tonia Cox. Ms. Cox, who lives with her family in Charlotte, came home to discover their family dog had knocked over a pack of sugar free chewing gum and had eating about 20 pieces.

“They told me to bring my kids in to say goodbye to her,” Ms. Cox told The Wall Street Journal. “We all held her and cried.”

Video: Hummingbird Saved from Gum | Don't Spit Out Your Gum

Fortunately, the Cox family dog pulled through, but it took three blood transfusions and about $5,000 in veterinary bills.

The ASPCA reports similar numbers. According to the Wall Street Journal, ASPCA’s poison centers first began warning dog owners about the dangers of xylitol in 2004, when it received 82 calls about xylitol poisoning. In 2015, it received 3,727 calls, an increase of over 4,500%.

Currently, evidence for the surge is anecdotal, and our journalists weren’t able to find data on the number of cases reported annually. That said, veterinarians and pet owners across the country are calling for new regulations forcing manufacturers to put warning labels on products containing xylitol.

Manufacturers, on the other hand, argue that warning labels for products intended for human consumption shouldn’t need labels to keep dogs safe.

According to Dr. Tina Wismer, medical director of the Animal Poison Control Center at the American Society for the Prevention of Cruelty to Animals, xylitol is a problem primarily because “Dogs don’t have an off button. They get into the muffins and eat an entire tin.”

The ASPCA recommends dog owners make a habit of reading labels and keep any food containing any amount of xylitol away from their dogs. Of course, foods that list xylitol as the first ingredient are the most toxic. For example, in some brands of gum, xylitol can make up more than half the weight of the food.

And if your dog does eat some gum? Take her to the vet. “If you get these animals in to a veterinarian, they tend to do quite well,” Dr. Wismer notes.

Video: PLZ WATCH IF YOU LOVE YOUR DOG... Things that you might not know could harm your pet.