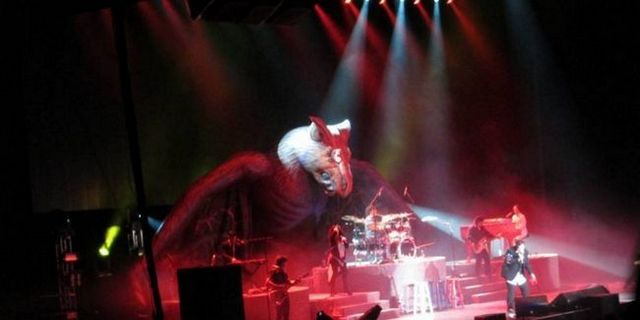 According to a story on Meat Loaf’s official Facebook page, Meat Loaf found a new touring companion – thanks to a rescued puppy he and his crew found while on tour.

About a week ago, when Meat Loaf and his band were at one stop in New Mexico for a show, some of his crew members spotted a puppy behind a dumpster, abandoned and alone. Scooping her up, the band took her to a local veterinarian, who checked her out and vaccinated her. Spending a couple of days with “sleeping, lots of cuddles and settling into life on the road,” the puppy (now named Ms. Karma) was adopted by one of the crew who found her, giving her a forever home. They even outfitted her with a skull-and-crossbones kerchief – a perfect accoutrement for this furry member of the classic rocker’s crew.

Meat Loaf’s Facebook post telling the story says, “We’ll miss her but she’s on her way to her new momma and sisters and a big ole ranch to run around. We’re even more excited that she’s staying a part of the extended Meat Loaf family forever!” After spending so much time with such an adorable dog, the members of Meat Loaf’s touring crew just knew that they couldn’t give Ms. Karma away. “There was no option of a shelter or a stranger. She was homed with ‘family’ and we will always know that she’s ok.”

Meat Loaf will continue to tour through most of November as he keeps working on his forthcoming album, March 2016’s Braver Than We Are. In the meantime, one more bat just flew out of hell* – and into the arms of a loving owner.