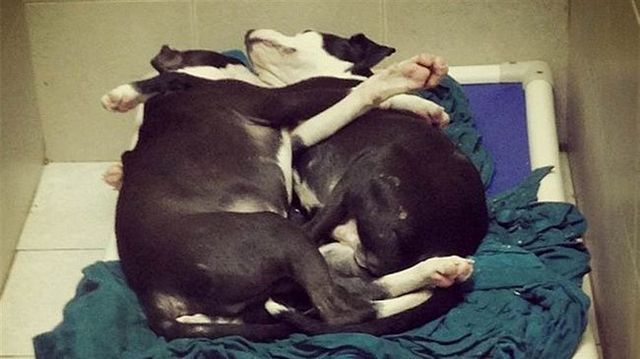 Sometimes when something goes viral, it can be easy to dismiss it as a fleeting bit of entertainment that won’t yield anything concrete or lasting. Luckily, this was not the case for a pair of shelter dogs in Atlanta, who started out as a viral sensation and ended up with a permanent home.

11-month old hound mix Kala and 15-month-old boxer mix Keira both went viral in July, when social media caught on to a photo released by the Angels Among Us Pet Rescue in Atlanta. In the photo, the two pups hold each other bittersweetly, Kala’s arms thrown lovingly around Keira’s neck. The adorable puppy photo was shared by the organization’s Facebook page, along with an announcement that they would have to be put down if they were not adopted before the day was done.

After that original post was made, it had more than 15,000 shares on Facebook, and within two hours the puppies found their forever home.

In a new post three months later, Angels Among Us showed a picture of Kala and Keira happy and hugged by their new best friends – Wendy and Pam, roommates and best friends, who adopted them within two hours of the original photo being posted. In the new Facebook post, written in Kala’s voice, the puppy declares, “After looking everywhere for our new family, they found us! Now we get to hug them all the time! That’s just our thing and they love that about us.”

This photo is one example of how viral media can help save lives, and bring new dogs to their forever homes. Wendy and Pam plan to start their own Facebook page to keep all of Kala and Keira’s fans up to date on how the dogs are doing with their new lease on life.