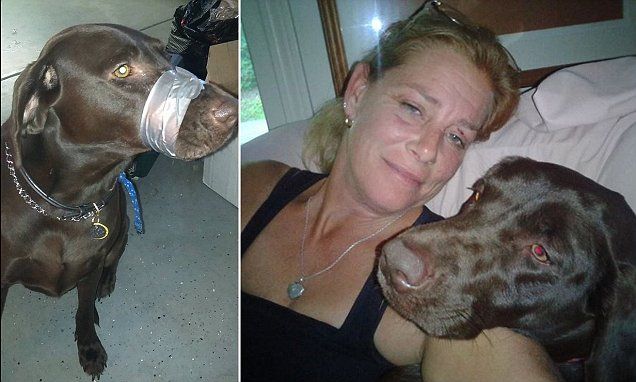 After thousands of animal lovers from across the country and around the globe flooded police and animal control offices in two different states with calls, messages, and emails demanding justice for a chocolate Lab whose mouth had been duct taped shut to prevent her from barking, police in Cary, North Carolina finally located and charged Katharine Lemansky, aka Katie Brown, with animal cruelty.

On December 14, Lemansky will appear in Wake County court to face a single charge of animal cruelty. One count of Class 1 Misdemeanor Cruelty to Animals, if convicted, carries with it a fine and up to 150 days in jail. Her animals were determined to be in good health and were not removed from her care.

Are the charges sufficient?

Fill out my online form.

§ 14-360.  Cruelty to animals- construction of section. If any person shall intentionally overdrive, overload, wound, injure, torment, kill, or deprive of necessary sustenance, or cause or procure to be overdriven, overloaded, wounded, injured, tormented, killed, or deprived of necessary sustenance, any animal, every such offender shall for every such offense be guilty of a Class 1 misdemeanor.

But, because Lemansky posted the images to Facebook, it could be argued that additional charges are due.

§ 14-361.  Instigating or promoting cruelty to animals. If any person shall willfully set on foot, or instigate, or move to, carry on, or promote, or engage in, or do any act towards the furtherance of any act of cruelty to any animal, he shall be guilty of a Class 1 misdemeanor.

Given the way the law is written above, should Lemansky be charged with two counts of animal cruelty?

Should she spend time in jail?

Should her pets (including the dog that was mistreated, that dog’s littermate, and a cat) be removed from her care?